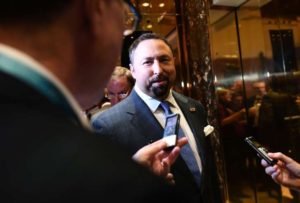 Leave it to Twitter to knock someone flat on his face.

Jason Miller quit suddenly this past week as communications director in Donald J. Trump’s new presidential administration. He offered the usual “spend more time with my family” reason for quitting a key job in a new administration.

Then comes this from another Trump transition aide: “Congratulations to the baby-daddy on being named WH ­Comms Director!” That’s what A.J. Delgado wrote on Twitter, adding that Miller is the “2016 version of John Edwards,” referring to the former Democratic U.S. senator and presidential candidate John Edwards, who had an extramarital affair that produced a daughter.

The Washington Post reports that Delgado deactivated his Twitter account, which leads me to believe that what he wrote has more than a grain of truth to it.

Is this important? I suppose it is if you want your presidential administration to be free of the kind of scandal that brings down other presidential contenders. Consider, too, that Edwards — who ran as the Democrats’ vice-presidential nominee in 2004 on a ticket led by John Kerry — came within just a few thousand votes in Ohio of actually becoming vice president of the United States.

So, you don’t want your chief spokesman — in this case Miller — speaking for a president when he is lugging around some potentially explosive baggage.

Trump insists that he uses Twitter to communicate policy issues in real time. Others within the president-elect’s circle of advisers apparently use it as a not-so-secret weapon.