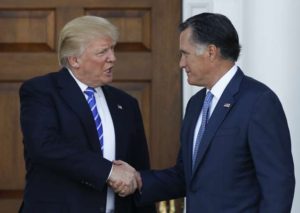 I’ll admit that I haven’t always watched closely the process a president-elect goes through to fill Cabinet picks.

Still, the growing tempest over Donald J. Trump’s vetting of secretary of state candidates has me wondering: Is this normal? Have previous presidents-elect faced this kind of outward and public tumult?

The Republican Party’s 2012 presidential nominee, Mitt Romney, is in the running to lead the State Department. A lot of Trumpkins don’t want him anywhere near the new president. Why? Mitt said some harsh things about their guy during the campaign. They want Mitt to apologize before Trump picks him. They also don’t believe Mitt will be loyal to the president.

I happen to believe Mitt was right when he called Trump a “fraud” and a “phony.” At one level, Mitt seems like the absolutely wrong choice to be the vicar of Trump’s foreign policy — whatever it is. Then again, selecting Mitt would verify what many of us have believed all along, which is that Trump has no policy and he’s looking for someone to help him build one from scratch; Mitt could do that for Trump.

Who’s other “favorite” for State? Rudy Giuliani, that’s who. The one-time “America’s mayor” would be a terrible choice. He has no foreign policy experience, other than the money he earned representing foreign governments — which presents a serious conflict of interest.

I keep hearing that former U.N. ambassador John Bolton is in the hunt, too, for the State Department post. He has called for the bombing of Iran, which surely works against any effort to develop “diplomatic initiatives” from the Trump administration. Don’t go there, either, Mr. President-elect.

Former Trump campaign manager Kellyanne Conway said she isn’t even sure Mitt voted for Trump in the election. My response? That’s no one’s business how someone votes; that’s why the ballots are cast in secret.

This melodrama is going to play out eventually, I reckon.

If only the president-elect had a deeper pool of applicants to consider for this post. He’s going to need plenty of help developing a foreign policy doctrine. Mitt could deliver it … if only he can get the Trumpkins on his side.

Hold on for a rough ride.