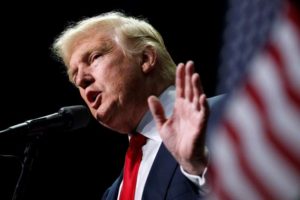 Donald J. Trump has cemented his title as a provocative prevaricator.

The president-elect has launched a fascinating counterattack against those who want to recount the ballots cast in Wisconsin, and possibly in two other states.

Trump said he won the Electoral College in a landslide and would have won the popular vote as well if you take out the “millions” of votes that were cast “illegally.”

Here is what he wrote in one of his flurry of tweets: “In addition to winning the electoral college in a landslide, I won the popular vote if you deduct the millions of people who voted illegally.”

I guess Trump is presuming that most if not all the “illegal votes” were cast for Hillary Rodham Clinton.

He how does he know that? He doesn’t. Trump doesn’t know anything about the electoral process that’s been called into question.

However, he knows that “millions voted illegally.” I believe the president-elect is applying the same base of knowledge he used to declare — falsely — that “thousands of Muslims cheered” the collapse of the Twin Towers on 9/11.