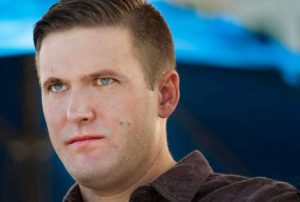 This is the kind of story that gives First Amendment purists — such as yours truly — a serious case of heartburn.

Richard Spencer is slated to deliver some remarks at Texas A&M University. Just who is this fellow? He’s the founder of a white nationalist group — the National Policy Institute — that’s been in the news lately.

I use the term “white nationalist” only because that’s what he calls himself. He’s actually a white supremacist. A flaming racist, if you will.

Spencer is a young man with an agenda that isn’t going over too well with a lot of us. I include myself in that category of Americans repulsed to the core by what this guy espouses. He recently exhorted a roomful of supporters with a salute hailing the election of Donald J. Trump as president that looked for all the world like something the Nazis used to do in Adolf Hitler’s presence.

Spencer is entitled to speak his peace. He happens to be an American citizen. The First Amendment protects people’s right to express their political views freely.

Some students and I’ll presume faculty at Texas A&M don’t want Spencer to speak Dec. 6 at the student center. They’re planning a protest. Some are petitioning the school to disinvite him.

As much as it pains and aggravates me to say this, they are mistaken if they intend to ban this guy from having the floor for his scheduled 30 minutes in College Station.

A university is a place that is supposed to promote a wide range of ideas, ideologies, philosophies and theories. Yes, even those many of us find offensive.

Here’s what the Houston Chronicle reported: “The university issued a statement Wednesday denouncing Spencer’s rhetoric and sought to distance itself from the event. The university had no immediate comment on whether it would try to cancel the speech.

“‘To be clear, Texas A&M University – including faculty, staff, students and/or student groups – did not invite this speaker to our campus nor do we endorse his rhetoric in any way,’ Amy Smith, a university spokeswoman, said in the statement.”

The Chronicle continued: “Private citizens can reserve space on campus for private functions, Smith said. The event organizer will pay all rental expenses, including security costs, she said.”

Even though the university didn’t “invite” this fellow, his presence on the campus ought to some credence to the notion that all ideas should be heard within that environment, even if they aren’t welcome.

Conservative speakers have been shunned before on university campuses. I dislike that notion, even as someone who identifies more with progressive than with conservative causes.

However, if we believe in the constitutional protection of free speech and expression, then we need to adhere wholly to it.

Richard Spencer’s message no doubt will disgust and enrage many who hear it. Let the young man speak … then show him the door.