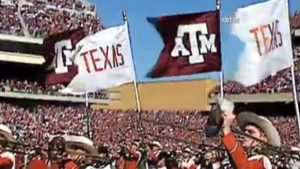 So help me, I don’t know why I am thinking of this.

But I just am.

It occurred to me today that I am missing an annual Thanksgiving event. It’s a sporting spectacle: the University of Texas-Texas A&M University football game.

The Aggies tossed the intense rivalry into the crapper when they bolted from the Big 12 and joined the Southeastern Conference a few years back. I heard something about UT’s football network driving the Aggies toward the SEC. I’m not very savvy about the business of college football, so I won’t comment on that.

But we’ve lived in Texas now for nearly 33 years. I’ve grown accustomed to many of this state’s traditions. The annual UT-A&M game on Thanksgiving Day was one of them.

It’s no longer part of the state’s celebration of this uniquely American holiday.

I don’t have any particular loyalties here. Our sons didn’t attend either school. I know plenty of Texas Exes and Aggies.

I’ve learned, for instance, that there’s no such thing as a “former Aggie.” I also learned long ago that Aggies refer to their longtime rival as “texas university.”

I guess one might say — and I don’t mention this with any antipathy — that Aggies are a touch more obnoxious about the rivalry than their Longhorn friends.

However, it’s all grown a bit muted since the two schools no longer face off on Thanksgiving either in Austin or College Station.

Yeah, I miss it. I only can imagine how I would feel if I actually felt an allegiance to either school.