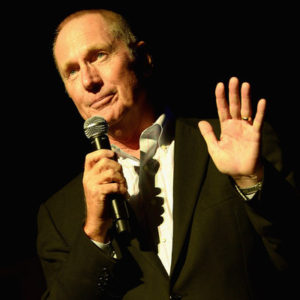 The noted Christian pastor cannot understand the fixation that many evangelicals seem to have with Donald J. Trump.

Trump’s support among evangelicals goes against the norm, said Lucado. Republican presidential nominees previously have had at least had a working knowledge of Christian theology, said Lucado.

Trump doesn’t have it. Nor does he have any semblance of a record devoted to doing the Lord’s work, Lucado writes.

“I’m curious why we’re giving him a free pass on this behavior. Typically, evangelicals have tried to hold our leaders up, if they call themselves Christians, to a standard consistent with the faith and then of course consistent with whatever office they hold. But it seems like we’re more than willing to give Mr. Trump a free pass. The classic one was in Iowa when he was asked, ‘Do you ever ask for forgiveness of sins?’ and he said, ‘No, I don’t need to.’ I nearly fell out of my chair. That’s right at the heart and core of the Christian faith, that we’re all sinners, we all need forgiveness of sins.”

Here’s more of the interview:

I have run out of ways to explain away the rationale of voters this year. I join Pastor Lucado in the crowd of baffled observers who cannot comprehend how — and why — this election has taken this turn.

I’ll more to say — probably quite shortly — about how wrong I’ve been to date in trying to predict the unpredictable about this goofy election.

14 thoughts on “Pastor baffled by evangelicals’ support of Trump”