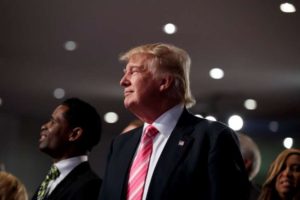 I cannot believe some media outlets are actually asking this question seriously.

Is Donald Trump going to agree to debate Hillary Rodham Clinton now that we know who will moderate these three events, or will he back out?

Clinton, the Democratic presidential nominee, has agreed to face Republican nominee Trump who, apparently, hasn’t yet agreed formally to show for any or all of them.

It seems that he wanted to see who the networks would select as moderators. Now he knows.

NBC’s Lester Holt will moderate the first one; ABC’s Martha Raddatz and CNN’s Anderson Cooper get the second one; Fox News’s Chris Wallace gets the third one.

All are capable journalists. All are tough-minded.

And all of them, apparently, have had some “issues” with Trump.

Thus, we get the question about whether the GOP nominee will show up.

The tempest over his feud with Fox’s Megyn Kelly is going down already as a serious back story of this amazingly unpredictable campaign. Trump didn’t show up for a debate when he learned Kelly would be one of the co-moderators. His absence obviously didn’t harm his nomination chances.

Trump has bitched about moderators before. All of the journalists named as moderators have questioned Trump hard on some of the answers he has given. Will his notoriously thin skin prevent him from being questioned yet again?

He’s also griped that the debates were scheduled opposite televised NFL games, which he said would drive down viewership of the debate — which, quite naturally, he alleges is a conspiracy to get Clinton elected.

The only thing I can surmise if Trump were actually to refuse to show up for any of these three joint appearances is that some of the conspiracy theorists are right about one thing: Trump is throwing this election because he truly doesn’t want to be elected president of the United States.