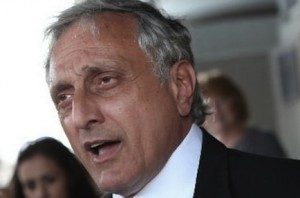 He’s also spouting idiocy about the religious affiliation of the president of the United States, who he has labeled this week as a Muslim.

Barack Obama has said repeatedly that he is a devout Christian. I believe the president. I do not believe the idiotic rant of Paladino.

Trump Advisor Carl Paladino: There’s ‘No Doubt’ That Obama is a Muslim

OK, then. Now, let’s look at something in the U.S. Constitution.

If you’re a real, true-blue, dyed-in-the-wool conservative, you believe in what’s called a “strict constructionist” view of the Constitution. You choose to interpret as little as possible in the document, much like one might do with, say, the Holy Bible.

So, let’s open our copy of the Constitution and turn to Article VI. It covers several areas of government, such as debt, laws and treaties, the oath officeholders take to support the Constitution.

And, oh yes, it has a clause at the end of it pertaining to “no religious test.”

It states: ” … but no religious test shall ever be required as a Qualification to any Office or public Trust under the United States.”

Do you know what I take away from that passage in Article VI? It means to me that an officeholder or a candidate for public office can worship any religion he or she chooses. It doesn’t matter what faith they worship.

Article VI lays it out there with crystal clarity.

That’s in a perfect world. I realize we don’t live in a world of perfection. It is soiled a good bit by those who choose to ignore constitutional tenets that fail to meet their world view.

Carl Paladino chooses, therefore, to declare in public that President Barack Obama is a Muslim, as if that’s supposed to label him as someone evil, sinister … anti-American.

I’ll make an admission: I am not as faithful to my own interpretation of the Constitution. Some constitutional tenets I take literally; I choose to interpret other tenets a bit more broadly. If you’re honest with yourself, you might be wiling to admit to doing the same thing yourself.

The “no religious test” clause of Article VI is one that — in my view — should be understood clearly and without equivocation. The framers knew exactly what they were doing when they expressly prohibited a “religious test.” They wanted to create a secular government run without specific religious influences.

My optimism runs eternal. Therefore, I’ll keep hoping for as long as I’m walking on this good Earth that one day we can apply that constitutional principle cleanly and without fear and suspicion.