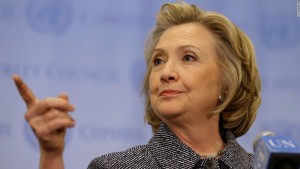 Trump responds by saying that Clinton’s husband, the 42nd president of the United States, has demonstrated an equally horrible attitude toward women.

Hillary Clinton and Donald Trump might be facing each other in the 2016 general election, which makes Trump’s view of women relevant.

Trump’s retort about Bill Clinton? Well, is that relevant? It would be if the former president was on the ballot. He’s not.

And that begs the question. Why is Trump bringing up the former president’s well-chronicled, heavily reported, much-discussed and debated inappropriate relationship with that young White House intern?

In my view, it’s an attempt at political diversion from the issue at hand, which is whether the current leading Republican presidential candidate really holds sexist views.

I am fully aware of former President Clinton’s history. Yes, I also know of the allegations of other extramarital relationships.

However, the man ain’t on the ballot.

His wife wants to be the next president.

Furthermore, his wife has raised the issue of a potential opponent’s fitness for the job they both want.