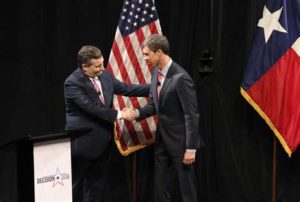 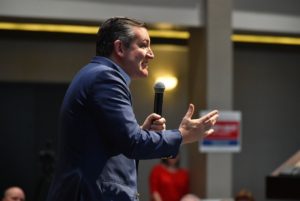 Ted Cruz is trying to rally Texas Republicans, as if they need any rallying.

The U.S. senator I have dubbed “The Cruz Missile” might be in for the fight of his life this year. He’s got a serious Democratic challenger waiting in the wings and, according to The Missile himself, the challenger has a Democratic constituency that is “stark-raving nuts” in its loathing of all things relating to Donald Trump.

I have made no secret of my own disdain for Cruz, not to mention the president of the United States. From the moment he stepped into his Senate seat in 2013 he has sought, in my mind, to make a name for himself. He hasn’t spoken on behalf of all Texans. He has spoken only for those who support his view that the Affordable Care Act needs to go and that the nation needs to build a wall along our southern border.

But he’s trying now, according to the Texas Tribune, to gin up enthusiasm among Texas Republican voters ahead of the upcoming midterm election.

Why is The Cruz Missile trying to light that fire? For starters, he is facing a well-funded opponent this fall in the form of U.S. Rep. Beto O’Rourke, an El Paso congressman who — and this interests me greatly — has made many forays into deeply Republican Panhandle communities in search of votes.

O’Rourke is raising a lot of money and he has his own base of supporters in the Panhandle fired up about his chances of knocking The Cruz Missile out of orbit this November.

We’ll have to see about that.

But O’Rourke and other Democrats have fired up Cruz enough for him to rally the GOP faithful. As the Tribune reports, Cruz made a series of political appearances this weekend: “Let me tell you right now: The left is going to show up,” Cruz said, delivering the keynote address at the party’s Lincoln Reagan Dinner. “They will crawl over broken glass in November to vote.”

The Tribune also reports: Cruz is feeling the heat in his own bid for a second term. O’Rourke, who has sworn off money from political action committees, outraised Cruz in the last three months of 2017, $2.4 million to $1.9 million. It was the second quarter in which O’Rourke’s haul was bigger than that of Cruz, who still maintains a healthy cash-on-hand advantage.

A lot of political observers believe we could be heading for one of those “wave elections,” where the out-party delivers serious political damage to politicians of the majority party. It happened in 1994, and again in 2010 and 2014.

I’ll simply add this bit of context: If Ted Cruz finds himself in any peril in this deeply Republican state, then you know the rest of the country is about to get drenched in a political tidal wave.