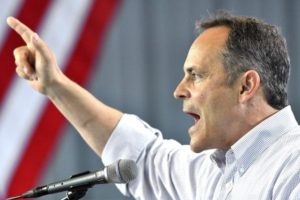 Gov. Matt Bevin needs to have his head examined.

Someone needs to check the Kentucky Republican’s noggin for parasites that have nibbled away at what passes for the reasonable and rational cells in his brain.

Speaking to the Values Voters Summit not long ago, Bevin said conservatives may have to resort to violence to protect their values against liberal incursion.

Bevin said if Democrat Hillary Clinton were elected president, she would set the nation on a dangerous course that could prompt violence. He told the audience that the “candle” of liberty might go out “on our watch.”

Conservatives are so angst-filled with the prospect of losing this election that they ought to shed some blood in order to preserve their principles. That’s what one of them has said.

Who, then, is the conservatives’ vicar, the champion of all they cherish? Republican nominee Donald J. Trump, the reality TV star, real estate mogul, beauty pageant owner/operator and — as we’ve heard — someone who thinks he’s got enough “star” power to have his way with women whenever, wherever and however he chooses.

I haven’t even mentioned — until right now — that he’s alleged to be a serial groper.

Yeah, man. That’s the guy Gov. Bevin and others think will carry the torch forward on behalf of conservative values.

Oh! I know I’m repeating myself, but …

Gov. Bevin needs to have his head examined.

Ben Carson said — initially, at least — that a Muslim isn’t fit to be president.

Mike Huckabee says Barack Obama is trying to “criminalize” Christianity and that the president is a “pretend” Christian.

Can we stop — please! — with the religion rhetoric?

Jindal was just the latest to ridicule another Republican presidential candidate’s statement of faith. Trump had spoken to the Values Voter Summit and proclaimed his deep Christian faith. Jindal followed him and said Trump has never read the Bible and that he believes only in himself.

Religion has no place here

I kind of get where Jindal, the Louisiana governor, is going with the Trump jabs. Trump opened himself up to the ridicule by proclaiming to a group of zealous conservatives that he’s one of them. Jindal, I suppose, has the right to challenge one of his rivals’ assertions in that regard.

But this continual back and forth regarding candidates’ faith is getting tiresome and, frankly, it misses a critical point about electing the next president of the United States.

The point is that the president is head of a secular state and government. We can argue until hell freezes over about what the founding fathers intended when they wrote the Constitution. But the finished document is as secular as it can possibly be.

The First Amendment spells it out. Congress shall make no law that establishes a state religion, it says. Isn’t that enough evidence of what the founders intended when they established the Bill of Rights in the nation’s government document?

So, let’s cut the talk about who’s a real Christian?

It does not matter. 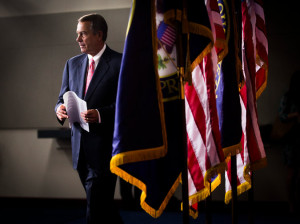 Here’s an interesting take on the sudden resignation of House Speaker John Boehner.

Is he right or wrong about whether the speaker served as a buffer between the extreme right wing of his party and the rest of a diverse nation?

“Actually I’m amazed John Boehner survived as long as he has. His one virtue as Speaker of the House has been his total lack of principle, which has enabled him to cobble together majorities or pluralities out of a Party that’s gone off the rails, becoming increasingly misogynist, homophobic, anti-immigrant, and anti-Muslim; filled with paranoid whackos, voodoo economists, anti-science half-brains, creationists, and white supremists; while being financed by billionaires, Wall Street, and big business.

“The problem for the rest of us right now is they’re still a majority in Congress, and many are aiming to close down the government unless Planned Parenthood is defunded — and then to default on the nation’s debt rather than lift the debt limit.

“John Boehner will not go down in history as one of America’s greatest Speakers of the House, but at least he served as something of a buffer between the Republican crazies and the rest of America. (This morning when Marco Rubio announced Boehner’s plan to retire, attendees at the Values Voter Summit in Washington roared their approval and then rose in a standing ovation.) After the end of October, that buffer is gone.”

New members of Congress proclaim a “new day” has dawned on Capitol Hill. You hear it after every election.

I get their enthusiasm and their interest in stirring the pot.

Here, though, is the surest way to actually prove a new day has arrived at the seat of federal government power.

Traditionally, the CBC has been all-Democrat organization. It goes back to its founding in 1969. The Senate at the time had a black member, Edward Brooke, R-Mass., who didn’t join.

Since then, its membership has comprised Democrats only.

I see nothing in the title of the organization that says its members must be from one party. The very term “Congressional Black Caucus” states quite clearly that all African-Americans who take the oath to serve in Congress are eligible to join.

So, with a brand new African-American Republican from Utah coming on board in January, and with another freshly elected Republican senator from South Carolina (Scott had been appointed to the seat by Gov. Nikki Haley) among its members, the CBC can demonstrate its belief in ideological diversity.

The Values Voter Summit earlier this year is an example of an organization that shuts out liberals because, by golly, liberals just don’t appreciate good ol’ American values the way conservatives do. That, of course, is utter horse manure.

Let’s turn this notion on its ear. The CBC is a traditionally progressive organization. How about throwing tradition out the window and insist that two new members of Congress — both Republicans and both clearly conservative — join the CBC and infuse that caucus with some fresh perspective?

You want diversity? There you would have it.

I didn’t know much about him when he and I met the first time as he ran for Texas land commissioner back in 1998. He was new to the Texas political spotlight. He seemed bright and engaged fully in the nuance of Texas government at many levels.

Now he’s gone to the dark side. He’s joined the nut-case crowd of the Texas Republican Party. He’s now a lame duck, having been beaten for his job by someone who’s even farther out there on the rightest wing of the party, Dan Patrick.

So what does Dewhurst do? Does he recede quietly back into the shadows and wait for his term to end? Oh no. He goes to that Values Voter Summit in Washington, D.C. and proclaim that Muslims are infiltrating our southern border.

How does he know that? He says Border Patrol authorities have found prayer rugs way down yonder. That means those dreaded “Islamic fanatics” are coming into Texas to blow up buildings, kill people and convert the United States of America into an Islamic nation.

Of course, the federal government denies such rugs exist.

The Texas Tribune reports: “(A) Texas congressman who sits on the U.S. House Homeland Security Committee has argued that there’s no threat of extremism on the border. U.S. Rep. Beto O’Rourke, D-El Paso, said during that same panel that top Pentagon officials had denied that there was any threat on the Texas-Mexico border from the Islamic State (ISIS) or similar groups. He added that similar claims were made about extremists crossing into Texas from Mexico during the United States’ conflicts with Libya in the 1980s, which he also mentioned to The Economist in an article published this week.”

Dewhurst always struck me as a studious guy, dedicated to the meticulous detail of legislating. It’s been said of him that he at times lacks the people skills needed to be an effective politician.

After reading his remarks at that Values Voter gathering, he also seems to lack the judgment to keep his finger off the panic button that signals the start of a religious war.

Cool it with the prayer rug talk, Lt. Gov. Dewhurst.

It is amusing, although not in a guffawing kind of way.

The Values Voter Summit has declared U.S. Sen. Ted Cruz, R-Texas, to be its kind of politician. They like his “values.”

I am left to wonder, though, why the conservative wing of the once-great Republican Party has laid claim to speaking for American voters’ values.

It must be marketing. The far right wing of the GOP has managed to brand itself as representing “values.”

Once-moderate GOP leaders need not step up to the microphone at this Washington, D.C. gathering. Democrats? Don’t even think about it. The podium belongs to those on the far right. It’s their values that count.

My values? Forget about it.

However, let’s look at the values of those who haven’t attended these “summits.”

I’ll gladly stand as an example of one of those Americans. For instance:

* I’ve served my country in uniform, gone to war for the U.S. of A. and served honorably in the U.S. Army.

* I have been married to the same woman for more than 43 years. We love each other deeply.

* My two sons are both upstanding men who now are in their 40s. We see and hear from them regularly. They’re hard-working, industrious, intelligent, well-educated, good-hearted men who make us proud every single day.

* I pay my taxes on time every year.

* I attend church fairly regularly and have served as an elder at the mainstream Presbyterian church my wife and I attend.

Ah, yes. There it is. That’s why I’ll never be seen at one of those Voters Values Summit meetings. I have voted for those dreaded Democrats for president.

The rest of it? I think I am an individual with pretty sound values — and I am quite sure I speak for many millions of other values-driven Americans who aren’t part of that right-wing fringe of society that shouts about its own values and thinks it speaks for all Americans.