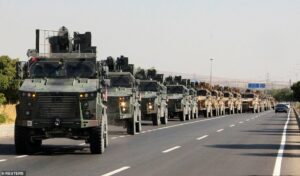 I am going to start referring to Turkey’s assault on neighboring Syria in more realistic terms.

It is an “invasion,” not a mere “incursion.”

Donald Trump pulled U.S. forces out of Syria, effectively abandoning our Kurdish allies who have joined us in the fight against the Islamic State.

Turkey responded by launching an assault in Syria, aiming specifically at the Kurds, whom the Turks hate with a passion. America media have been referring to the assault as an “incursion.” I looked the word up in the dictionary. It calls “incursion” a raid, like an “invasion.” I then looked up “invasion” in my tattered American Heritage Dictionary. It refers to an “invasion” as an “entry by force” of one nation into another.

So, have the Turks used “force” to enter Syrian territory? Yep. They have done precisely that very thing.

By my way of thinking, it’s no “incursion.” It’s a full blown “invasion.”

A notable misuse of the definition of such a military action occurred in 1970, when U.S. forces conducted an “incursion” into Cambodia during the Vietnam War. It was supposed to be hush-hush. It wasn’t anything of the sort. Our fighting men invaded Cambodia to root out Viet Cong fighters.

The invasion didn’t turn out so well. Students protested that action in the United States and at Kent State University in Ohio, four students died when National Guard troops opened fire on them while they were demonstrating against the war.

So, you are welcome to call it an incursion if you wish. Me? I’ll refer to the Turks’ action what I believe it is: an invasion, which fits that description far more than what Donald Trump has called the flow of refugees from Latin America into the United States.

An invasion by any other name doesn’t make it any more justifiable. Thus, what the Turks are doing to our allies in the fight against ISIS is as shameful as any invasion by one nation against another.