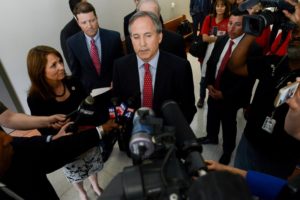 Nessel, though, also believes Paxton is something quite weird. She calls Texas’s top legal eagle a “walking hate crime” because Paxton decided to refer to Rachel Levine as a “man.” And why did the indicted Texas AG make that scurrilous reference? Because Levine is a transgender individual who now is a woman; Levine also happens to serve as an assistant secretary of Health and Human Services in the Biden administration and was named one of USA Today’s women of the year.

Therein lies what I believe is an essential problem with too many Republican politicians of Paxton’s ilk. He hurls insults at individuals gratuitously.

“When people ask me why I don’t attend National Association of Attorneys General events anymore, it’s this. Paxton is a walking hate crime,” Nessel said.

He and Texas Gov. Greg Abbott have decided, for instance, that parents who seek to pursue “gender-affirming care” for their transgender children are committing “child abuse,” which is utter nonsense on its face. It’s also cruel and inhumane.

For what it’s worth, I consider Ken Paxton to be an embarrassment to this state, even though he has been elected twice as AG — for reasons that escape me.

When I think of the term “child abuse,” I think of someone delivering physical harm to a child, or tormenting them emotionally, or hurling epithets in an effort to denigrate them.

Getting medical care for a transgender child, one who wants to change their gender identity? No. Not … even … close.

Texas Gov. Greg Abbott, who has been accused by the right-wing nut jobs running against him in this year’s Republican Party primary of not being “conservative enough,” has declared his intention to label the transgender matter I just described as “child abuse.”

That is a gigantic step toward reprehensible governance by someone who has disappointed me greatly ever since he became governor in 2015. My disappointment has now become disgust.

Shelly Skeen, a senior attorney with Lambda Legal, said it’s highly unlikely that a judge would justify child abuse charges or removal of a child based solely on the use of gender-affirming therapy.

“Texas law has a very clear definition of what child abuse is, and it’s not this,” Skeen said.

… Child abuse investigations based on gender-affirming care are almost unheard of in Texas. Officials at the Texas Department of Family and Protective Services say that there have been three reports last week “meeting the description in the AG opinion and Governor’s directive” but offered no other details. No investigations have been launched, officials said.

Greg Abbott has lost his marbles if he thinks he can obtain a successful prosecution on gender-affirming care by calling it a case of “child abuse.”

We are heading down the slipperiest of slopes with this kind of nutty proclamation coming from the Texas governor’s office. 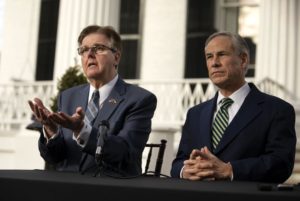 Texas Lt. Gov. Dan Patrick has found a curious way of declaring victory even when he clearly loses a key political battle.

Patrick said today he sees no need to resurrect the Bathroom Bill that died a much-needed death in the 2017 special legislative session. You remember this one, right? It would have discriminated against transgender individuals by requiring people to use public restrooms according to the gender assigned to them on their birth certificate.

In other words, if you were born a male but have changed your gender to female, you still have to use the men’s restroom; and vice versa. It’s a virtually unenforceable notion, but the Texas Senate approved it anyway. Thanks to the courage shown by then-House Speaker Joe Straus, the Bathroom Bill went nowhere in the special session.

“When you win the battle you don’t have to fight the battle again,” Patrick said in a press conference with Gov. Greg Abbott and the brand new Texas House Speaker Dennis Bonnen. Then, according to the Texas Tribune, he said that the school district “behavior that necessitated the action has stopped.”

So he declared victory!

Very good, Lt. Gov. Patrick. Except that you lost! Count me as a Texan who is glad that Patrick’s will didn’t become law in Texas.

The 2019 Legislature that just convened has many more important matters to ponder. They deal with taxes and human trafficking. How about water management? Or perhaps investing in alternative energy development? Then there’s public education and public higher education.

The Bathroom Bill need not return to the legislative agenda. 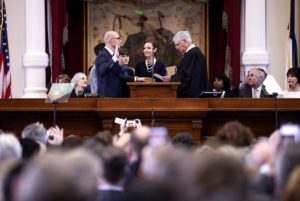 Texas has a new speaker of the state House of Representatives.

Dennis Bonnen of Angleton is a Republican who says he doesn’t believe in “sugarcoating” issues. He says he calls ’em the way he sees ’em. “I am direct and I am a problem solver,” Bonnen said.

But he also apparently is more interested in substantive matters than he is in some of the more cultural issues that came out of the Texas Senate in 2017.

Bonnen succeeds Joe Straus as speaker. Straus, a San Antonio Republican, decided to step aside and not seek re-election in 2018. I am one Texan who is grateful, though, for Straus’s resistance to the Senate approval of that ridiculous Bathroom Bill, which required people using public restrooms to use those facilities that comport with the gender on their birth certificate. It discriminated against transgender individuals and Straus would have none of it.

Speaker Straus managed to scuttle the Bathroom Bill during the Legislature’s special session in the summer of 2017, angering Lt. Gov. Dan Patrick, under whose watch the Senate approved the bill.

The new speaker’s legislative agenda suggests he is going to travel along the same path as his predecessor — to which I offer a salute.

Good luck, Mr. Speaker. May the new Man of the House lead the legislative chamber with wisdom and reason. 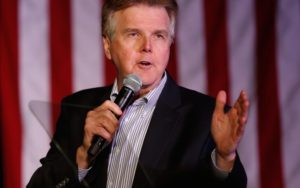 There they go again, finding solutions to problems that really don’t exist.

Texas Lt. Gov. Dan Patrick has announced plans to introduce a state bathroom bill to the Texas Legislature that would punish local school systems for failure to restrict access to restrooms to people who are born with certain anatomical accoutrements.

Transgender Texans will have to fend for themselves, therefore.

I don’t understand fully a lot of things. Transgenderism is one of them. However, I do get that some among us identify with the opposite gender; boys think of themselves as girls and vice versa. Many of them are undergoing surgical procedures to match how they perceive themselves.

I guess my question of Lt. Gov. Patrick is this: How in the world are you going to enforce this rule?

Let’s say you’re a young man who is undergoing procedures to become a young female. You have to use a public restroom. Do you use the men’s room because you have certain male anatomy parts? Or do you slip into a stall in a female restroom, close the door, do what you have to do and then exit without anyone being the wiser?

Let’s apply the same question to a young woman who’s going through the same change of identity. How does the state enforce such a rule?

According to Texas Monthly’s Burka Blog: “The bill—dubbed the Texas Privacy Act—would include penalties for public schools that do not restrict access to restrooms, changing rooms, and showers to match a person’s assigned gender at birth. But the bill also allows schools to provide single-person bathrooms for transgender students.”

Is this really a problem that requires the state to invoke a legislative remedy? Is it really a widespread issue that demands the state become involved in an issue that could be decided by local school boards, along with local educators and administrators?

Well, I had a decent night’s sleep after Bruce Jenner’s big announcement Friday.

I looked outside this morning and I discovered that the leaves were still on the trees, the grass is still green, the sky is blue and the sun rose in the east just as it does every single day.

And yet some of us no doubt are tittering and wondering about the individual formerly known as The World’s Greatest Athlete and his decision to “transition” to womanhood.

Do I want to honor his privacy? I believe Jenner surrendered his privacy when he married his third wife and got involved in that reality TV shtick involving her daughters. Plus, he did the two-hour interview last night. No, privacy isn’t it.

The story bores me.

Therefore, I made a key decision this morning upon awakening.

It is that I won’t use this blog to get involved in the international discussion.

I might discuss the issue of transgenderhood in general down the road, sometime and in some other context. There might even be a mention of Jenner in the distant future.

Today? I’m going to take care of business — and wait for the sun to rise in the morning.

This story has been off my radar. I believe it’s still off the screen, except that tonight the principal player in this story is making international news.

He went on the air for two prime-time hours to tell Diane Sawyer that he’s changing his sexual identity.

Honestly, I don’t know how to respond to this.

Do I respond to the news that an individual has decided to change his gender? That’s his call exclusively and it doesn’t matter to me one single bit. Thus, that part of the story remains off my radar — although it’s likely on everyone else’s.

Or does one respond to the fact that a major broadcast network chose to devote two hours to this story?

ABC Television is run by smart individuals who know their audience. The audience wants to hear it. I guess it’s a big deal to many millions of folks. It’s not to me.

I’m left, therefore, to ponder the direction that popular culture has taken us.

For now, I’m going to try to get a good night’s sleep. I’ll awaken tomorrow and likely will read a lot of commentary throughout the infinite Internet universe about what’s transpired tonight with Jenner’s revelation.

At the moment, I’m left merely to shake my head and try to comprehend the significance of Jenner’s declaration that “I’m not gay.”