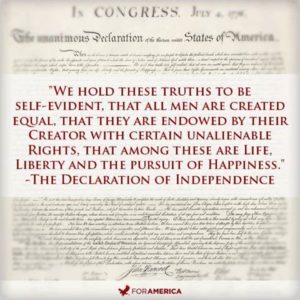 I hope the debate over the nation’s founding documents continues for a good while. We need, as Americans, to remind ourselves of what the founders wrote and try to parse what they meant when they wrote these words.

While steering away from specific mention of the current controversy swirling around the nation, I feel a need to examine briefly this particular passage from the Declaration of Independence.

“All men are created equal.”

I suppose you can look at that phrase and take it one of several ways. Yes, all “men” were “endowed with … certain unalienable rights.” That, of course, excludes women, who were left out of that formula. They couldn’t vote; indeed, it took the United States of America until the early 20th century to get around to granting women that right.

There’s a discrepancy worth noting here. “All men” didn’t really mean “all.” You see, we had this portion of our population at the time the Declaration of Independence was written that wasn’t even considered fully human. They were the slaves. They were kept in bondage by many of the men responsible for founding the nation.

I will try to insert myself into Thomas Jefferson’s skull for a moment. The principal author of the Declaration perhaps intended for it to mean “all.” Whatever his intent or his idea at the time he put that thought down on paper, it doesn’t negate for one instant its fundamental truth.

All men — and eventually all women — are endowed by the rights laid out in the Declaration of Independence.

Fast-forwarding to the 21st century, it is preposterous in the extreme to accept the presence of those who pretend to be members of a “superior race” of human beings.

We’re in the midst of yet another national discussion about hate groups, about so-called “white supremacists” and those who adhere to a political philosophy against which we entered a world war.

They will insist that they are the patriots among us. That they know the meaning of our nation’s founding.

The founders didn’t get everything quite right when they penned those cherished words. Those who came along later have sought to amend and improve that high-minded language.

We’re not quite at the point of pure perfection. But we’re a lot closer to it now than we were at our nation’s beginning.

The preamble to the U.S. Constitution declares our intention to “form a more perfect Union.” I read that to mean that we’ll never quite reach the finish line. That does not mean we should stop reaching for it. 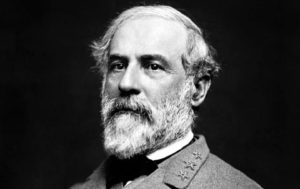 Four men have been thrust posthumously into the front of the national debate over the removal of statues.

The president of the United States launched an impromptu press conference this week at Trump Tower. Donald Trump began answering questions about the Charlottesville, Va., riot that left three people dead. White supremacists, neo-Nazis and Ku Klux Klansmen were protesting the removal of a statue of Robert E. Lee. Counter protesters clashed with the racist protesters.

It got real ugly real fast.

Then the president weighed in. He said “many sides” were at fault. Then he blamed the hate groups. Then on Tuesday he doubled down on his initial response, saying “both sides” were to blame for the mayhem.

Then his press conference veered into some truly bizarre territory.

I mentioned Gen. Lee already. Trump decided to mention that Confederate Gen. Stonewall Jackson’s statue also is targeted for removal. Then he asked: Should we take down statues of George Washington and Thomas Jefferson? They were slave owners, too, just like Lee and Jackson, he said.

If Donald Trump had a clue about history he would realize this:

Yes, Washington and Jefferson enslaved human beings. They were imperfect men. However, they led a revolution that resulted in the creation of the United States of America. Washington commanded our armed forces fighting against the British Empire; Jefferson penned the Declaration of Independence and was a key author of the U.S. Constitution. Those contributions to the founding of the nation does not pardon them for their slave ownership, but it is a mitigating factor that grants them greatness.

As for Gen. Robert E. Lee and Stonewall Jackson, they fought to destroy the Union that Washington and Jefferson helped create. Gen. Lee struggled whether to fight for the Union or to fight for the Confederate States of America. He chose to side with Virginia, which seceded from the Union. Jackson joined him in that terrible, bloody Civil War. Those men were traitors. Moreover, they were responsible for the deaths of hundreds of thousands of Americans who died in the bloodiest war this nation has ever fought.

To his everlasting credit, President Lincoln declared during his second inaugural address — just weeks before he would be gunned down at Ford Theater — that the nation should bind the wounds that had torn it apart. “With malice toward none and charity for all,” the president said, signaling that Confederate leaders wouldn’t be prosecuted for their high crimes against the Union.

Donald John Trump doesn’t grasp any of that, as he made abundantly clear when he attached moral equivalence between two of our nation’s founders and two men who sought — and fought — to destroy the nation.

Who does Bill Press think he is?

The one-time CNN news commentator and Democratic Party “strategist” posted a Facebook message today in which he blasted the idea behind the National Prayer Breakfast. He called it a right-wing attempt to blur the line between church and state.

“The last thing I want to see is Republicans and Democrats saying how much they believe in the Bible,” Press said with an apparent scorn on his face.

He said President Obama has been “suckered” into attending the annual event.

Holy mackerel, Bill. You need to take a deep breath.

Presidents who attend these events always are careful to maintain a certain ecumenical air about their remarks. The National Prayer Breakfast is open to people of all faiths and the prayers recited are universal in nature, given that they aren’t Christian, Muslim, Jewish, Shinto or Buddhist in nature.

That’s the spirit of the Constitution that participants seek to preserve at this event.

The most hilarious part of Press’s screed against the Prayer Breakfast was this: “Thomas Jefferson and James Madison would never attend the National Prayer Breakfast. And neither will Bill Press.”

OK, not only did this clown place himself side by side — symbolically — with two of the greatest Americans who ever lived, he referred to himself in the third person. I can’t decide which of those things is more offensive.

Knock it off, Press.

OK, I know what you’re thinking: Bill, why are you on the air today? Why aren’t you at the National Prayer Breakfast with President Obama and the Dalai Lama?

Are you kidding? I’ve been in Washington 15 years now. I’ve been invited to the National Prayer Breakfast every year. And I’ve never gone – and never will.

In fact, I hate the National Prayer Breakfast. Because I think it’s nothing but a right-wing attempt to tear down the wall of separation between church and state, which too many Democrats – including President Obama – get suckered into.

Thomas Jefferson and James Madison would never attend the National Prayer Breakfast. And neither will Bill Press.

One of this year’s Christmas gifts, from my older son Peter, got me thinking about how quickly history is able at times to judge someone’s greatness.

What intrigued me is that of the two men mentioned in the title, one of them is memorialized on Mount Rushmore. Then something occurred to me.

Teddy Roosevelt became president in 1901 after President William McKinley was assassinated. Roosevelt, who was 42, was the youngest man ever to assume the presidency; John F. Kennedy in 1960 became the youngest man, at 43, ever elected to the office. TR was elected in his own right in 1904. He left office in early 1909, turning the presidency over to Taft. Roosevelt then became so let down by Taft’s presidency that he sought the office once more in 1912, running on a progressive platform under the label of the Bull Moose Party.

The result of that campaign produced President Woodrow Wilson.

What does have to do with Mount Rushmore? Well, Gutzon Borglum began carving out the faces on the South Dakota mountainside in 1927, just 15 years after Roosevelt’s last run for public office and only eight years after his death in 1919. The other three men honored on that mountain are George Washington, the father of our country; Thomas Jefferson, the author of the Declaration of Independence and Abraham Lincoln, who fought successfully to preserve the Union during the Civil War. Their greatness was long established by the time Borglum’s crews began blasting away on Mount Rushmore.

TR’s legacy, it could be argued, had yet to be finalized, as he in effect was a contemporary of the sculptor.

My thoughts have turned to whether someone could undertake such an project in that context today. I do not believe we’ve had a president since Roosevelt who’s quite measured up to any of the four men whose faces are carved into the mountain. Some have argued for Franklin Roosevelt, TR’s cousin, while others have said Ronald Reagan deserves to be added to the sculpture.

I prefer to leave the mountain as it stands.

Still, it strikes me that Gutzon Borglam took a gamble when he included Theodore Roosevelt in that pantheon of great Americans.

I’ll look forward to reading one more historian’s take on how he earned his place on the side of that mountain.