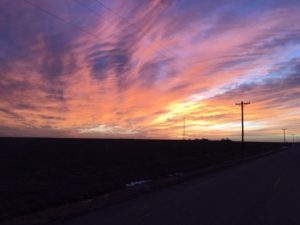 AMARILLO, Texas — We came back to the Texas Panhandle — and got a look at this!

Let me be clear: I have talked already on this blog about how God gave the Panhandle the kind of sky that makes jaws drop. It is the Almighty’s payback for declining to give the region towering mountains and tall trees.

But I don’t care that you’ve heard it already. It bears repeating.

The sunrises and the sunsets are two of the reasons we enjoyed living here. They reminded us frequently that natural splendor isn’t contained in snowcapped peaks or endless miles of virgin forest.

Indeed, we moved to Texas in 1984 from a part of the country — the Pacific Northwest — that contains plenty of both tall mountains and tall timber.

We settled initially in the Golden Triangle along the Gulf Coast, where we were treated by thunderstorms that roared incessantly.

We ventured to the Top of Texas nearly 11 years later. Sure, we had our share of thunder and lightning. We learned early about Palo Duro and Caprock canyons. We discovered how you can lose sight of your location on that flat terrain called the Caprock when you ventured into the floors of those chasms.

It ignited again tonight with the sunset that took my breath away. As a matter of fact, at the very moment I snapped this picture the voice on the radio made specific mention of that “gorgeous Texas Panhandle sunset.”

So, there it is. I’ve said it again. Who knows? There might be more to say the next time the day ends in such spectacular fashion.