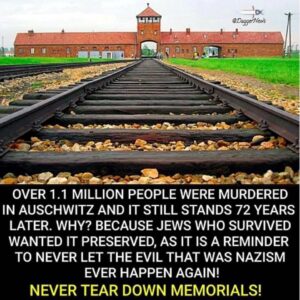 Yes, by all means look at this picture.

The message was posted on Facebook I presume by someone who opposes the takedown of Confederate memorials. The text is spot on … until we get to the last line.

Auschwitz stands as a grim reminder of humankind’s cruelty. It doesn’t glorify anything or anyone. Nor do any of the other memorials scattered throughout Europe that take note of the Holocaust and the evil that produced it.

Therefore, I still stand with those who oppose the glorification of the American Civil War and the Confederate States of America’s secession from the Union to fight to preserve slavery.

Those who fly the Confederate flag do so by and large to celebrate what the CSA did, which was to commit treason against the federal government and to bring on the bloodiest conflict in American history.

My wife and I went to Germany in 2016. We stayed with friends in Nuremberg. I had the chance to tour the Documentation Center in the city where Nazi and Japanese leaders were put on trial for crimes against humanity. Our friend in Nuremberg told us that Germans do not fly the swastika to celebrate what the Nazis did; nor do they salute picture of Adolf Hitler. They have erected or preserved these structures to remind the world — and themselves — of the horror that humanity is capable of bringing to itself.

I never will accept the notion that the Confederacy, the Civil War and the reason for fighting it should stand as proud symbol of our nation’s “heritage” and “history.” Sure, keep the statues — but place them in museums and tell the world about the evil they represent. 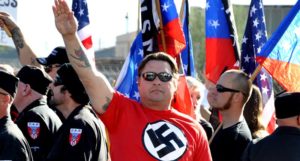 The “Greatest Generation” of Americans marched off to war in 1941.

Millions of them went off to fight the Empire of Japan in the Pacific; millions of others went in the other direction, to take up arms against the Third Reich and its fascist allies in Italy.

The Nazis who governed Germany did so under the banner featuring the swastika, which has remained the symbol of unequivocal evil over the decades since the end of World War II.

Events of the past few days have brought that symbol back to the fore in the United States. It’s good to ponder for just a moment the very notion that Americans would associate themselves with that symbol in any fashion.

The Charlottesville riot over the weekend involved Nazis who marched under that very banner yet again. They wore the swastika on their t-shirts, on arm bands. They adhere to the very philosophy that perhaps their grandparents or great-grandparents fought. Perhaps they lost ancestors in that conflict.

How in the name of all that is holy can anyone associate themselves with that philosophy? How can they in good conscience stand with that symbol of evil? Oh, wait! I guess I assumed that such sociopaths even have a conscience. Silly me.

I have my own deep-seated bias against that symbol. My late father enlisted in the Navy in early 1942, not long after our country entered World War II. He wanted to get into the fight right away and Uncle Sam obliged, sending him to Europe to wage war against that swastika.

And he did. His involvement in the Mediterranean theater of operations was intense. It was brutal. Men who fought under that swastika tried to kill my father — repeatedly and I am quite certain with maximum malice. Dad responded with equal intensity.

Quite obviously, he was able to come home at the end of the war. He got on with the rest of his life.

Over time, he talked occasionally about his war experience. He didn’t hate Germans. He did hate the symbol under which those young men fought against him. As I grew up, I was imbued with the feeling of hate as well for that swastika.

As we’ve seen over many years, though, not all Americans share that hatred. Some of us embrace that symbol. For the life of me I cannot fathom it.

But here we are, talking to each other once again about an emblem that symbolizes the very worst in our human existence.

And to think that the president of the United States has just elevated those who today are marching yet again under that evil symbol effectively to the same level of those who oppose them.