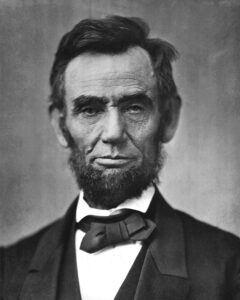 This is the face of an unelectable politician and, no, it is not because he isn’t particularly “telegenic.” It is because his ideas within his beloved Republican Party have become grist for the trash heap.

Consider the very notion that the man I consider to be our nation’s greatest president, Abraham Lincoln, is no longer the voice and face of a party that once called itself “The Party of Lincoln.” President Lincoln held the nation together during its darkest period, during the time when Americans fought each other over slavery and that thing one side referred to as “states’ rights.”

Then, as the Civil War drew to a close and as President Lincoln delivered his second inaugural speech after winning re-election in 1864, he said he would bind the wounds that divided us, that he would proceed with “malice toward none and charity for all.” An assassin struck a month later and denied the president the chance to deliver on his promise.

The party under which he ran for president twice has become something the president wouldn’t recognize. He certainly would not condone the tone it has taken in recent years. It has been hijacked and twisted into a form that bears no resemblance to the party of the so-called “big tent.”

Donald John Trump’s control over the party starting with the 2016 GOP presidential primary campaign has taken it on a destructive course. It’s not that the party is destroying itself. It is that the ideas it promotes has gained new followers who are wedded to the hideous notions espoused by its leader.

The Grand Old Party has become a cult whose followers are infiltrating the ranks of candidates throughout Congress and into statehouses, county courthouses and even into ostensibly non-partisan city halls and school board meeting rooms.

Imagine a Republican with the chops of Abraham Lincoln seeking public office today. Imagine how the 16th president himself would fare were he to become a candidate.

Abraham Lincoln likely couldn’t be elected as a Republican because his party would lack the good sense to nominate him in the first place. The future of civil discourse and debate in this country deserves better than what lies ahead.

Well, it’s been an Earth-shaking couple of days at the Supreme Court of the United States, don’t you think?

Then today comes a ruling that makes gay marriage legal in every state in the Union.

Today’s ruling is going to cause considerable apoplexy among political conservatives, some of whom now are saying the Supreme Court overstepped its bounds. Justice Antonin Scalia, one of the dissenters in today’s ruling, said the nation is now being governed by a majority of justices.

The ruling tosses out statewide bans on gay marriage on the basis of the 14th Amendment to the U.S. Constitution, the document we use to establish a governing framework for the entire nation.

States’ rights? I believe the federal Constitution trumps those rights. The equal protection clause of the 14th Amendment means what it says, that all citizens are guaranteed the right to “equal protection under the law,” which means that if gay citizens want to marry someone of the same gender, they are entitled under the law to do exactly that.

Is the battle over? Not even close.

It’s going to shift to the issue of religious liberty, where individuals will argue that their faith and their religious opposition to same-sex marriage also is guaranteed under the First Amendment. Some Republican candidates for president are calling for a constitutional amendment to make same-sex marriage illegal; good luck with that, as the 14th Amendment stands as the protector of all Americans’ rights to equal treatment under the law.

The court has done what it had to do. It has affirmed what the U.S. Constitution declares in guaranteeing every American the right to marry who they love — no matter what.

Wait! I think I see a silver lining beginning to shine through as the nation continues this debate over the meaning of a flag.

Americans — all of us — finally might begin to understand the meaning of the Confederacy, why it was formed in the first place and why its place in history has to be put completely in its proper context.

The debate has ignited in the wake of the Charleston, S.C., church massacre. South Carolina legislators have agreed “to debate” whether to take down the rebel flag that flies on the statehouse grounds in Columbia. Let ’em debate, then take the thing down.

But the broader issue must be to determine the Confederacy’s place in American history.

As Ta-Nehisi Coates writes in Atlantic magazine: “The Confederate flag is directly tied to the Confederate cause, and the Confederate cause was white supremacy. This claim is not the result of revisionism. It does not require reading between the lines. It is the plain meaning of the words of those who bore the Confederate flag across history. These words must never be forgotten. Over the next few months the word “heritage” will be repeatedly invoked. It would be derelict to not examine the exact contents of that heritage.”

I’ll stipulate here, as if it needs stipulation, that I am not a Southerner by birth. I was born and reared in Oregon, way up yonder in Yankee territory. Oregon became a state on Feb. 14, 1859 and sent troops to battle to fight to preserve the Union. But for the past 31 years, my family and I have lived in Texas, which was one of those Confederate States of America, those states that committed the treasonous act of seceding from the Union and fighting tooth and nail to preserve something called euphemistically “states rights.”

It has been papered over by Confederate apologists ever since that the underlying reason for going to war in the first place was to keep black Americans subjugated. The individuals who governed these Dixie states wanted to maintain the right to flout federal law and that if state officials felt it was OK to allow slave ownership, then they would be willing to fight to the death to preserve that right.

They did. They lost that fight. Yet the justification for going to war remains central to this discussion of “Southern heritage.”

The article attached to this post lays out clearly the intentions of those who decided to go to war with the United States of America. Read the notations taken from that time and you’ll understand why this discussion is important to have and how the tragedy in Charleston has opened up this effort to remind us of why Americans went to war against fellow Americans.

The shooting has stopped but the battle endures. Those who keep insisting that the Civil War was about protecting state sovereignty are going to lose this one, too.