Howard Schultz’s name is “mud” in the eyes of millions of Americans who don’t want another gazillionaire to seek the presidency of the United States.

Count me as one of them.

Schultz says he is considering an independent run for president in 2020. He has long been aligned with Democrats, but now he says Democrats and Republicans have wrecked the political process. He wants to fix it. So he would seek the presidency as a “centrist independent.”

What are his skills? What commends this guy to become president?

Well, he is the former CEO of Starbucks, Inc., the Seattle-based coffee shop chain is noted for its “venti”-sized lattes, mochas and cappuccinos. Schultz calls himself a “self-made” mogul, who grew up “in the projects” and had to fight his way to the top of the business world.

Come to think of it, the current president of the United States said much the same thing as he campaigned for the only office he ever sought. Schultz has that in common with Donald Trump, too: He’s never run for public office; he has never served the public — apart from serving them (arguably) overpriced hot beverages.

Do I want another rich guy with no public service experience running for president? No. I want an experienced politician, someone who knows how government works, knows its limitations and understands that a president is not a dictator. Donald Trump hasn’t reacted well to the notion that he’s not a business CEO, that he is part of a three-legged stool that props up the federal government.

Presidents are not empowered to move mountains simply with the stroke of a pen, unlike a business magnate. Does the Starbucks guy understand that? I would not bet real money that he does.

There’s also the other back story in play. A Howard Schultz independent candidacy well might peel off votes from whomever the Democratic Party nominates in the summer of 2020 and it well might help ensure the re-election of the guy many millions of us do not want returned to the nation’s highest office.

Donald Trump can bellow all he wants about how “strong” the state of our Union is under his watch. I happen to disagree vehemently. The Union is fractured. It needs repair. It needs a president who understands government and knows how to work its complex machinery.

Trump isn’t the guy to do it. Neither is Howard Schultz.

I’ll just declare it up front: I want Americans to elect a politician as president of the United States. Hey, man . . . it’s a political job! 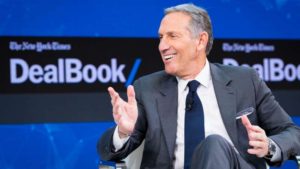 Americans have been subjected to the chaos associated with a real estate mogul turned politician who was elected president of the United States in 2016.

Now we hear that another business tycoon might decide to make a run for the nation’s highest office in 2020.

Please! No! A million times no!

The latest novice pol who wants a shot at playing the role of commander in chief and head of state is Howard Schultz, the former owner of Starbucks. He calls himself a “centrist independent” and a “lifelong Democrat.” Schultz told “60 Minutes” he would run as an independent candidate.

Let’s see. How would that work? He could siphon off votes that would go toward an actual political figure running as a Democrat opponent against Donald J. Trump. Is there a chance a Schultz candidacy could improve the president’s re-election chances? Yeah! Do ya think?

Trump campaigned for president touting (falsely it likely turned out) his past as a “self-made billionaire.” He touted his business acumen, forgetting to mention all those bankruptcies, lawsuits and failed business ventures. He had zero political or government or public service experience before deciding to run for POTUS . . . and oh brother, it shows!

Howard Schultz wants a crack at the world’s toughest job?

Give me a break.

Schultz is planning a national tour to pitch his notion of running for president. Good grief. Spare me the platitudes and promises.

I want someone sitting behind the big desk in the Oval Office who has an understanding of what’s at stake. Trump isn’t the guy. Neither is Schultz.

Oh, and check out Trump’s response to Schultz’s possible candidacy. He wrote this on Twitter: Howard Schultz doesn’t have the “guts” to run for President! Watched him on @60Minutes last night and I agree with him that he is not the “smartest person.” Besides, America already has that! I only hope that Starbucks is still paying me their rent in Trump Tower!

Yep. That’s the president of the United States of America.

Isn’t he just so damn dignified? 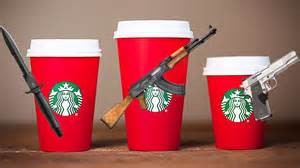 On Nov. 30, 2013, I posted a blog item about the bogus “war on Christmas” that the conservative media keep telling us is occurring.

The right-wing media no doubt are going to remind us yet again that secular society has declared war on the spiritual significance of the Christmas season and that Christians shouldn’t fall for what secularists are trying to foist on us.

Starbucks is the latest bogeyman. I keep reading something about those simple red coffee cups where one can order their “venti” peppermint mochas with a double shot of espresso and extra whipped cream. No mention of Christmas on the cups. They’re just red. I guess some folks are upset by it.

I will continue to maintain until the moment I check out of this world that the real warriors in this phony war are those who do battle on the retail floor with others in search of the cherished toys for their children or grandchildren.

Who are the instigators of this ridiculousness? The retailers.

Blame them, will you?