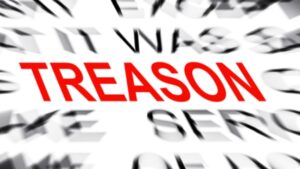 He said the former president of the United States likely committed “treason” by spying on the 2016 Trump presidential campaign. He said that former CIA director John Brennan knew about it; so did former Director of National Intelligence James Clapper; same for former FBI director James Comey; of course, let’s not forget former Vice President Joe Biden … he knew about it, too.

Trump today called it the “biggest political scandal in history.”

Was it “treasonous,” Mr. President? Are you kidding me?

First of all, there was no “spying” done on the campaign. There were questions raised about allegations of Russian interference during the 2016 campaign. The Obama administration was obligated to examine it under the law.

Furthermore, for Trump to toss out “treason” once again amounts to demagoguery at its worst.

For the record, treason is defined by federal statute as a betrayal of the country, of doing something to aid an enemy state.

What’s the punishment for committing an act of treason? Death!

I am so damn weary of hearing Trump spew this trash.

We have an election just over the horizon. For my money, it cannot get here soon enough. Donald Trump’s incessant posturing about alleged “spying” is dangerous and it needs to end.

It appears to me the only way to shut this liar down is to vote him out of office.