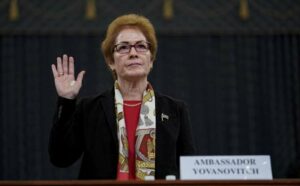 It has been said time and time again, that “no one is above the law, and that includes the president of the United States.”

It’s an article of truth to be sure. Our laws apply to all Americans.

Which brings me to this point: How does the president of the United States, Donald Trump, get away with smearing, defaming and slandering individuals?

The former envoy was removed from her embassy post earlier this year by Donald Trump, who has the authority to change ambassadors. That is his call. We all get that.

However, he smeared Yovanovitch while recalling her from her post in Ukraine. The envoy is noted for her diligence and diplomatic skill. She has been honored and decorated over her 33-year career in the foreign service. Then the president calls her “bad news” and blamed her — and this is rich — for what went wrong in Somalia, where she was posted prior to her Ukraine assignment. He made the Somalia reference while Yovanovitch was testifying — in real time — during the congressional impeachment inquiry that is under way on Capitol Hill.

The president offered no evidence of any “bad news” element. Nor has he explained in anything approaching detail why he thinks badly of Yovanovitch.

Is he above the law? Or must he adhere to the same laws as the rest of us? I’ve long believed that presidents of the United States are not deities, nor are they dictators. They are our elected heads of state and government, but they are citizens … just like the rest of us.

I just am baffled by how this individual — the president — gets away with saying the things that fly out of his mouth. He has defamed Marie Yovanovitch’s exemplary reputation.

Don’t such laws that protect citizens against such abuse exist when they regard the president?