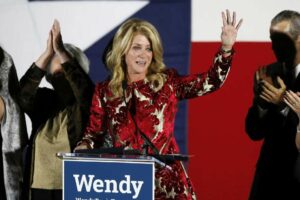 I was a bit surprised to hear that former Texas state Sen. Wendy Davis, who used to represent Fort Worth and Tarrant County in the Legislature, is running for a congressional seat … way down yonder in San Antonio.

She wants to run in the fall of 2020 against Republican U.S. Rep. Chip Roy, who damn near got beat in 2018 as Texas Democrats became energized by the candidacy of Beto O’Rourke in his race against U.S. Sen. Ted Cruz. Roy ran for he seat vacated when Lamar Smith decided against running for re-election.

I believe Wendy Davis is a fine public servant. She is smart, well-educated, capable and might prove to be a lightning-quick study on the issues pertaining to the 21st Congressional District. I don’t know much about Roy, other than he is a solid Donald Trump sycophant, er, supporter. Any effort to remove someone of that ilk is OK with me.

But I do wonder whether Davis’s opportunism isn’t revealing itself.

She burst on the national scene in 2013 when she led a Democratic filibuster in the Legislature against a stringent anti-abortion bill that eventually got passed by the Senate and signed into law by Gov. Greg Abbott. She then ran for governor the following year and got trounced by the incumbent.

Davis earned her political chops, though, by representing the Fort Worth area. I am now wondering if she isn’t opening herself up to critics who could suggest that she’s merely looking for a public office to occupy, so she found a potentially vulnerable Republican a good distance away from her home.

Politicians have been called “carpetbaggers” by employing that kind of tactic. I know Davis is not the first pol to do such a thing. She won’t be the last one, either.

Hey, Davis is a grownup. She likely is well aware of what lies ahead for her, presuming she wins the Democratic primary. I’m just looking ahead to what could become a bruising, bitter and bellicose battle for power in the U.S. House of Representatives.

I really do like having Ted Cruz in the U.S. Senate.

The freshman Republican senator said this the other day about his absence on a vote that confirmed Loretta Lynch as the latest U.S. attorney general: “Absence is the equivalent of a ‘no’ vote.”

There you have it. He missed the vote because he had a prior commitment to attend a fundraiser back home in Texas. Cruz had voted earlier on a motion to end a filibuster on Lynch’s nomination; he voted to keep the filibuster going.

The filibuster was broken, the vote took place, Lynch had the votes to win confirmation. So, what was the point of Cruz being there to cast his expected “no” vote on Lynch?

Well shoot, senator. It mattered because you didn’t put it on the record. It’s not part of the Senate’s official voting record.

I’m still uncertain precisely why Cruz disapproves so strongly of Lynch’s ascending to the office of attorney general, other than her support of President Obama’s executive order granting temporary amnesty to millions of illegal immigrants. I guess Cruz doesn’t much like the notion of an attorney general supporting the policies of the president who appoints her to the Cabinet, where everyone serves at the pleasure of the president of the United States.

That’s been the mantra of other senators who opposed Lynch, even those who said upon the announcement of her appointment that she is “highly qualified.” Some of those former supporters changed their mind when she declared her backing for the president’s action on immigration.

I think it’s strange. Then again, that’s just me.

What the heck. Sen. Cruz was entitled to attend the fundraiser. He’s running for president, after all. Let’s not assume, though, that this issue of non-voting on this confirmation — as well as other key votes he’s missed while campaigning for the White House — will disappear.

It’s the price a sitting member of Congress pays when he or she seeks the highest office in the land. Sens. Barack Obama and Hillary Clinton paid it when they ran in 2008. Sen. Cruz can expect the same thing in 2016.

No one was hurt, at least not physically. There might be some political injury as a result. To whom, though, remains an open question.

Senate Majority Leader Harry Reid carried through with his threat to employ the “nuclear option” regarding filibusters. Before today’s action, ending a filibuster required 60 votes, out of 100 senators. Today, the rules changed. All it takes after today is a simple majority of 51 votes.

The aim is to push through some appointees whose confirmation had been held up by stubborn Republican senators. The appointees in question were picked by President Obama to sit on the D.C. Court of Appeals, the second-most critical federal bench, after the U.S. Supreme Court. Three highly qualified jurists’ appointments were held up by GOP filibusters.

It’s a pattern that the Republican minority has followed since Barack Obama took office in January 2009. The president today endorsed the Senate Democrats’ action — no surprise there — by declaring “enough is enough.” He noted that four of President George W. Bush’s five appointees to that court were approved by the Senate, while his appointees have been blocked.

Republicans objected — again, no surprise — by using high-minded language about the “tyranny of the majority,” declaring that Democrats were exercising “raw power” in seeking to deny the Senate minority a voice.

Two points need to be made.

First is that the Senate needs to function in its “advise and consent” role. Blocking judicial appointments, or any other presidential pick just because they can is not in keeping with the constitutional provision. Presidents, by virtue of their election to the nation’s highest office, deserve the right to select qualified individuals to serve. That’s a perk that goes with winning an election. Democratic Sen. Dick Durbin of Illinois said today that GOP objections to the D.C. court selections had nothing to do with the nominees’ qualifications. To “advise and consent” is supposed to allow senators to determine whether someone is fit for the office to which they’ve been appointed.

The second point is to question whether Senate Republicans are willing to stand by their noble objections should they gain the majority after next year’s election, which is no sure thing. If they believe in the right of the minority party to have a voice in determining the flow of business, would Senate Republicans — if they occupy most of the Senate’s 100 seats in January 2015 — be willing to return to the 60-vote filibuster-busting rule? Would they grant the new Democratic minority the same opportunity to block appointments that the GOP has had since Barack Obama took office?

The Senate has to work for the people. As for the second point, I am not holding my breath on Senate Republicans sticking to their principled objections.

Republican senators are blocking three judicial nominees to the federal court system. President Obama nominated highly qualified jurists to the D.C. Court of Appeals. The GOP has filibustered the nominees, however, requiring a 60-vote majority to break the filibuster and moving the nominations forward. They offer a silly rationale for the filibuster, saying that the D.C. court has too many seats and that it can function with just eight judges. The 11-member court has three vacancies at the moment.

Reid has had his fill of this kind of tactic. He is threatening once again to invoke a rule that would enable the Democrats who control the Senate to change the rules to require a simple majority — 51 votes — to unclog the nomination process.

Why not do it?

Republicans contend the measure could backfire on Democrats if the GOP takes control of the Senate after next year’s election. That would mean Republicans could stop any Democratic effort at filibustering legislation proposed by a theoretical GOP majority.

Reid insists that the Founding Fathers did not intend for the Senate to be hamstrung by procedural maneuvering, which is the result of the 60-vote rule.

The nation operates on a simple majority rule, yes? We elect our public officials who manage to gain a majority of 50 percent plus a single vote. Heck, we even elect presidents who don’t even get a majority of the votes cast, but manage to win a majority of votes awarded by the Electoral College (see George W. Bush, Rutherford B. Hayes, Benjamin Harrison and John Quincy Adams).

The 60-vote rule can be abused, as has been the case with this constant blocking of judicial appointments by the president of the United States.