This little boy is likely to become the new face of humankind’s ability to inflict inhumane pain and suffering.

He is a 5-year-old Syrian boy whose home was bombed in an air strike in the city of Aleppo, where the youngster lives with his parents.

A CNN anchor broke down and cried today when she reported on the youngster’s wounds and on the carnage that’s occurring within his country.

The boy’s name is Omran Daqneesh.

I don’t know at this moment whether he is alive. Nor do I know the fate of his parents.

The Syrian civil war has killed at least a quarter-million people. The Islamic State is seeking to toss out the government of Bashar al Assad. The Russian air force is supporting Assad. The United States opposes Assad’s government and is working to destroy ISIS.

Who dropped the bomb that obliterated Omran’s house? We don’t know. It appears to have been a Russian air strike.

Will the image on the video attached to this post do anything to end the violence? Probably not.

It’s worth looking at this video, time and again, just to understand the hideousness of war and the irreparable damage it inflicts on the world’s most defenseless victims. 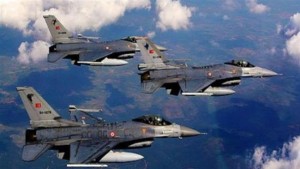 Just how tense is it getting in the sky over Syria?

Or over Turkey, for that matter?

It’s tense enough for the Turkish air force to shoot down a Russian air force fighter jet for encroaching on Turkish airspace … allegedly.

President Obama, of course, is right to assert that Turkey — like all nations — is entitled to protect itself against foreign incursions. The Turks said they warned the Russians aboard the downed fighter at least 10 times that they were flying in Turkish airspace. The Russians reportedly ignored the warning, so they were shot down.

A couple of things are worth keeping in mind.

Tensions are tighter than a tick right now. The Russians might have flown into Turkey’s airspace, but it wasn’t by very much.  The countries are supposed to be on the same side in the fight against the Islamic State. Turkey, though, is a NATO nation and the shooting down of a Russian jet by a NATO power is the first since 1952.

Turkey might have been within its rights legally, but does the Ankara government really want to anger the Russian high command?

What’s more, Turkey has been known to violate other countries’ airspace with a fair amount of recklessness. Greece, for example, has registered a number of complaints to Turkey for its airspace violations regarding the many Greek-owned islands in the Aegean Sea. Indeed, the two countries’ air forces have faced off countless times in the sky over the sea. Some of us, therefore, might take Turkey’s claim of territorial integrity with a bit of salt.

My own hope is that all the parties in this heightening war with the Islamic State take extra care to avoid future confrontations.

This alliance is tender and fragile enough without one principal shooting down warplanes from another.