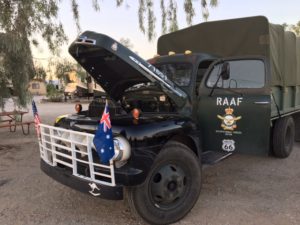 NEEDLES, Calif. — As the saying goes about some places on Earth, this place isn’t the end of the world but if you get up on tippy toes, you can see it from here.

But it’s not without its charms. Tall mountains loom in the distance; palm trees dot the landscape. The weather’s pretty nice, too — except during the heat of the summer.

But my wife and I encountered a most interesting group of fellow travelers. They belong to a club that restores military vehicles. We noticed about a dozen of them at an RV park where we parked overnight.

One of them was a Royal Australian Air Force Mercury truck. (See picture with this post.) The gentleman who owns the truck, an Aussie from Queensland who now lives in Abilene, Texas, said the Merc is a 1951 model that was assigned to the Australian occupation force in Japan from 1946 to 1953.

Another fellow traveler, a woman from Truckee, Calif., said the group was traveling along Route 66 from Chicago to Los Angeles. Needles is near the end of their journey. “So, you must have gone through Amarillo,” I said to her. “Oh, yes. Lovely place,” she answered.

Most of the vehicles were half-ton or three-quarter ton trucks.

My thought was twofold: How cool to save these military vehicles and how what a marvelous journey to embark with friends and acquaintances across the country.

Our own journey continues as well. We’ve been more or less winging it as we work our way north from “the end of the world.” 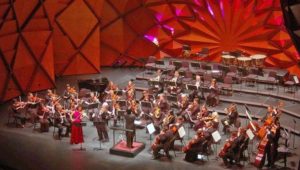 Amarillo has plenty of art. It has equal measures of culture. It also has an organization dedicated to bringing the city’s art and culture to those who otherwise just be passing through Amarillo on their way to points east, west, north and south.

The Texas Commission on the Arts has bestowed the city with a cultural district that, according to Center City of Amarillo, will enable the city to focus on the art and cultural offerings it has to lure travelers to stay awhile.

Amarillo joins a number of other cities that have received this designation. One of them is Lubbock, where officials say they’ve enjoyed some success in planning events aimed at attracting folks to stay in the Hub City.

According to NewsChannel 10, “It literally puts Amarillo on the map and it shows that we have the quality and quantity of the art to make Amarillo a cultural destination,” said Beth Duke, Executive Director of Center City. “So, we intend to use this to promote tourism to bring more people to Amarillo and more importantly to the cultural district.”

What all this means in a tangible sense is that the cultural district becomes a lure for those who (a) are just passing through or (b) might be spending a night or two to see some of our more well-known sights.

The idea as I understand  the cultural district is to showcase the myriad art, entertainment and cultural events occurring around the city. The cultural district involves the downtown district — which is the midst of a major makeover — Historic Route 66, Sunset Center, and the neighborhood around Amarillo College.

And oh yes, we have that ballpark that’s about to begin sprouting up across from City Hall.

The city has received a 10-year cultural district designation. After that time, it will need to be renewed. I am going to send plenty of good vibes out to help ensure the city’s cultural district takes root, grows and proves to be the economic driver that Beth Duke and others envision.

The times are a-changin’ out here on the Caprock. 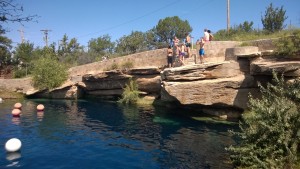 SANTA ROSA, N.M. — The attraction pictured here is one of the cooler places I’ve ever seen.

It’s an 80-foot hole in the ground. It is surrounded by rock. The water is about 80 to 90 feet deep. A spring feeds it and the water temperature is at a constant 64 degrees.

The Blue Hole is just off of Historic Route 66 in this tiny community about 150 or so miles from Albuquerque and about 55 miles west of Tucumcari.

My wife and I took a dip in the Blue Hole. The water is, shall we say, bracing.

The Blue Hole is known as a mecca for scuba divers. On the day we visited, we saw several classes of divers being instructed by experts. They dove deep into the hole, practicing rescue techniques. There were others, such as my wife and me, who were there just to get wet and jump into the crystal clear water from the ledges above its surface.

I came away from visiting the place wondering how a community such as Santa Rosa doesn’t capitalize on the obvious attraction that this place is to many people. We drove all along Route 66 through town and couldn’t find a single dive shop, or other specialty outlet that caters to divers who come here — presumably — from great distances away just to partake in a thrilling activity.

From my vantage point, I didn’t see any advantage being taken to cash in.

But it’s still quite a sight to see. 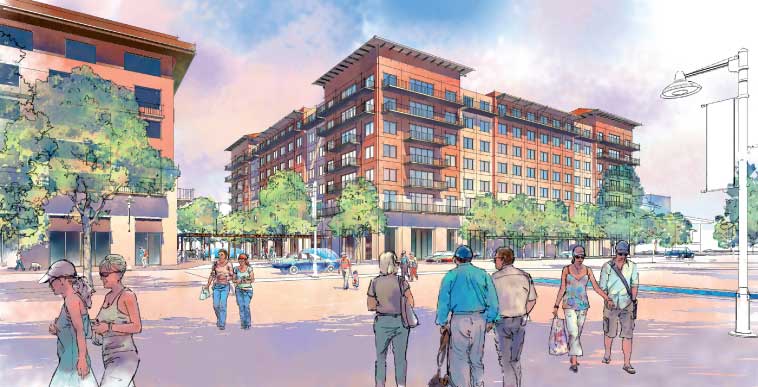 Amarillo City Council members got a snootful this week from some of their constituents.

No, it wasn’t the usual gaggle of naysayers who keep harping on why Amarillo can’t do this or that.

The pleas instead came from a handful of young people interested in seeing the city redevelop its downtown district into a place that would attract them, make them want to come back here or perhaps to stay and start their lives.

The open meeting at City Council Chambers featured a number of folks who support the concept that’s been developed for downtown’s rebirth — assuming, of course, that it’s allowed to come into this world.

They didn’t speak to council members Tuesday about the nuts and bolts of funding. They spoke instead of the concept.

I’m not a young person. I do agree, though, with our young residents.

Some other, older residents, said they disapprove of what’s being promoted. While the young folks like the idea of emulating, say, Austin, at least one other said the city should retain its current flavor, its ambience and whatever else it currently boasts.

Well, so much for “thinking outside the box” for some folks.

Me? I’m willing to take a chance on turning Amarillo into something more than a tad more vibrant than it has been.

I’ve been helping produce a weekly newspaper in Tucumcari, the Quay County Sun. I just finished editing some stories that told of that community’s weekend festival, called Rockabilly on the Route — that would be Route 66, which runs through Tucumcari, just as it runs through the heart of Amarillo.

Isn’t there an opportunity for Amarillo, with its own Route 66 heritage and its own arts and music community, to capitalize in such a manner? Sixth Avenue runs right through the city’s central district, connecting with Historic Route 66 west of the central district.

How about not letting such an opportunity slip through our fingers?

That, I believe, is what the young people said they want for their city.

I’m glad they spoke out. I now hope the council members heard them.

Intriguing, to say the least.

Tex Randall, that gangly statue that looks as though it’s about to collapse onto U.S. Highway 60 in Canyon, has become the backdrop for a most interesting photo shoot.

A Sports Illustrated swimsuit model is seen perched on one of ol’ Tex’s boots.

What an, um, interesting location to shoot a swimsuit babe.

SI has made a serious name for itself with its annual Swimsuit Edition. Some mighty fascinating young women have graced the cover of the magazine known for its coverage of, well, sports. I think of Elle McPherson and Christy Brinkley immediately. I know other famous super models have sprung toward stardom after appearing on the SI swimsuit cover.

SI shot Tex’s boot as part of a Route 66 tour. As my friend Karen Welch noted in her article in the Amarillo Globe-News, U.S. 60 isn’t all that close to Route 66, which runs east-west through Amarillo. But I guess it was close enough to suit the editors at SI.

As Welch reported in the Globe-News: “The group made no guarantees any photo involving Tex Randall would make the print or digital editions.”

Hey, does it really matter? It’s good to know the editors at SI found something to accompany a photo of one of its models.