I am going to presume that Robert Mueller III wishes he wouldn’t be dragged back into the news cycle, but he has been brought back into public discussion.

Trump said, not surprisingly, that Stone had been treated “unfairly.” Mueller, in an essay published by the Washington Post, disputes that contention vigorously.

Here’s the deal, though. Suppose the president had pardoned Stone. It would have expunged the record of a felony. A pardon doesn’t expunge people’s memories, their knowledge of what brought about the pardon. Mueller writes in the Post: A jury later determined he lied repeatedly to members of Congress. He lied about the identity of his intermediary to WikiLeaks. He lied about the existence of written communications with his intermediary. He lied by denying he had communicated with the Trump campaign about the timing of WikiLeaks’ releases. He in fact updated senior campaign officials repeatedly about WikiLeaks. And he tampered with a witness, imploring him to stonewall Congress.

Had the president pardoned Stone, all of that would have remained part of the unofficial record. So, what Trump did merely was to keep his pal out of the slammer, which is the reward Stone got for being so loyal to Trump.

I really am not worried that Trump might actually pardon Stone before he leaves office. So what if he does? Trump already has saved Stone from the worst of his conviction, a prison sentence. A full pardon doesn’t wipe clean the memories of those of us who believed in the conviction that came down in the first place.

Indeed, the first sentence of Roger Stone’s obituary is going to include a prominent mention of the crimes for which a jury convicted him … no matter what! 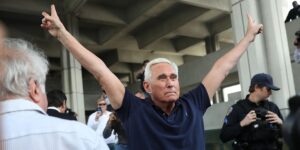 This is among the most unsurprising stories of the Donald Trump administration: Trump commuted the sentence of one of his closest confidants and political fixers.

Roger Stone was facing a 40-month prison sentence. Until today, when Trump commuted his sentence.

Now, in a way I am somewhat heartened that Trump didn’t issue a blanket pardon for Stone, a decision that would have wiped the record of his conviction for lying under oath off the books. With a commutation, the guilty verdict stands … for whatever it’s worth.

Stone has been a longstanding pal of Trump. He’s been an even more longstanding Republican Party dirty trickster/operative.

He had lied about what he knew about Donald Trump’s campaign shenanigans. According to the Business Insider: A jury convicted Stone of seven felony counts in November, none of which included collusion or conspiracy. The former strategist was convicted of five counts of making false statements to the FBI and congressional investigators, one count of witness tampering, and one count of obstruction of justice.

Stone won’t serve any time behind bars. Does this mean a pardon is out of the question? Hardly. Trump might pardon Stone before leaving office, which I hope is very soon … as in January 2021.

But this decision — or a form of it — was expected all along.

It’s all part and parcel of the way Donald Trump rolls. 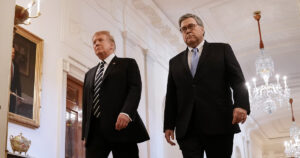 Oh, how I want to believe Attorney General William Barr’s declaration that Donald Trump’s tweeting about pending criminal justice matters makes it “impossible” for the AG to do his job.

It’s just that whenever anything emerges with Donald Trump’s fingerprints on it, one must look for the rest of the story.

Barr told ABC News that he wants the president to stop tweeting about pending cases. He said the president is interfering with Justice Department officials doing their job.

Barr also said that his decision to recommend a lighter sentence for Trump pal Roger Stone than the one that prosecutors had sought had nothing to do with Trump’s tweet that called the prosecutors’ recommendation a “miscarriage of justice.”

However, I am left to wonder whether that is the whole truth. He could make that declaration without acknowledging any sort of pre-arranged agreement with Trump … correct?

I want to get back to the key point, which is that if Trump is going to continue to tweet and commend openly about matters that require discretion, that Barr’s job will remain an impossibility.

What does the AG do? He should just quit. Walk away. Go back to private practice. Leave the chaos and confusion to the next sucker who is willing to take the thankless job of reporting to the current president of the United States.

I had hoped that William Barr would be the grownup in a Cabinet full of sycophants and toadies. He has proven me wrong. Barr could restore some of that hope simply by quitting. 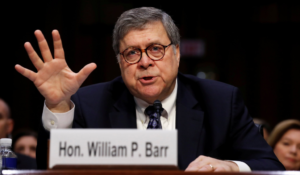 He said in an ABC News interview that Donald John Trump’s tweets make it “impossible for me to do my job.” He added that “I think it’s time to stop tweeting about Department of Justice criminal cases.”

Trump has been tweeting about Justice Department recommendations that his pal Roger Stone should get a seven- to nine-year prison term for lying to Congress and for witness intimidation.

He also has been chiding the federal judge presiding over the case. The president has been interfering directly in the criminal justice process.

So, Barr says the president’s interference makes it “impossible” for him to continue as attorney general?

Here’s a thought, Mr. AG: You should grant yourself and the rest of us a profound public service … by resigning.

What in the name of judicial integrity has gotten into U.S. Attorney General William Barr?

The AG consented to an interview with ABC News and criticized Donald John Trump for commenting on pending judicial cases, for criticizing federal judges, for using his Twitter account to set policy.

When pressed by ABC News correspondent Pierre Thomas about how the president will react to being criticized by a member of the Cabinet, Barr said he will resist being “bullied” by anyone, and that includes the president of the United States.

Trump has been on a Twitter tirade of late, criticizing former White House chief of staff John Kelly over the ex-chief’s criticism of Trump over his handling of firing Army Lt. Col. Alexander Vindman and other matters relating to the Ukraine matter that led to the House impeachment of Trump.

Now comes the attorney general, who’s been a disappointment to many of us who had hoped he would be the grownup among Trump sycophants. He has proved to be little more than a Trump toadie … at least until right about now!

Barr is saying what he should have been saying all along, that Trump is behaving badly and is putting the country in dire jeopardy with his irresponsible assertions via Twitter about pending legal matters. The president’s interference in the Roger Stone sentencing recommendation from DOJ prosecutors is just the latest example.

Stone faces a prison sentence after a jury convicted him of lying under oath and intimidating witnesses related to the Russia election attack probe. DOJ attorneys recommended seven to nine years in the slammer. Trump called the recommendation a “miscarriage of justice”; Barr responded by reducing the recommendation.

My sense, though, after hearing his ABC interview, is that he doesn’t like Trump meddling in these matters. 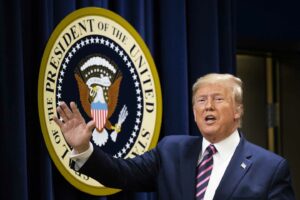 What are you talking about, Mr. President?

You went off on that White House rant about Roger Stone being humiliated, ruined, framed by “corrupt” Justice Department prosecutors. I’ll get right to the point, Mr. President.

Your railing against the sentencing recommendation of seven to nine years is based on clear-cut charges that the jury convicted Stone of committing. Yet you said “no one knows” what the charges are. Really?

The jury convicted your pal of lying to Congress — under oath; of witness tampering; of witness intimidation. It’s on the record, Mr. President. If you took the time to read anything, you would know it.

Aw, but what the heck. That wouldn’t stop you, as near as I can tell, from blathering idiocy, which is what you did in the presence of the Ecuadoran president.

As for the prosecutors who quit in protest, they showed considerable courage and commitment to the rule of law.

Unlike you and so many of your Republican allies in Congress. 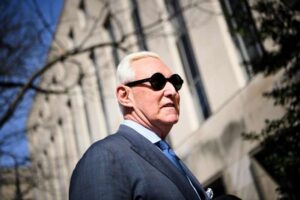 Four prosecutors who recommended a seven- to nine-year prison term for a convicted felon who’s also a friend of Donald John Trump have quit.

Why? Because the attorney general of the United States, William Barr, has said he wants to reduce their recommendation to send Trump pal Roger Stone to the slammer for as long as nine years.

Does this seem like political meddling in the criminal justice process? It does to me.

And who, pre-tell, ordered this recommendation? It might have come from, oh let’s see, the White House.

Stone is awaiting sentencing for lying under oath and for hindering the investigation into the Russian collusion matter that ended up on special counsel Robert Mueller III’s desk.

Trump called the career prosecutors’ sentence recommendation a “miscarriage of justice.” My question now is whether Barr acted on the president’s Twitter rant. If so, then it looks for all the world to me as though we have yet another case of presidential meddling where it does not belong.

The prosecutors who quit have shown considerable backbone and grit in walking away from their responsibilities in this matter. They remind me of when AG Elliot Richardson and his deputy William Ruckelshaus resigned rather than follow President Nixon’s order in 1973 to fire special prosecutor Archibald Cox as the Watergate scandal began to spin out of control.

These four prosecutors today can stand tall for the principle they have endorsed.

Donald J. Trump, as is his habit, fired off a tweet today after the indictment of confidant Roger Stone that provided another example of egregious exaggeration.

Special counsel Robert Mueller has indicted Stone on charges of lying about “the Russia thing.” Trump unloaded with a Twitter message that bellowed “NO COLLUSION!” and said Mueller is embarking on the “biggest witch hunt” in U.S. history.

Oops! No, Mr. President. It’s not a witch hunt. Even if it was a witch hunt, it would be far from the “biggest” in American history.

You see, there was a time before the nation was actually founded when they went after women in Salem, Mass., looking for actual witches. They killed these women, Mr. President. In case anyone has forgotten, no one has died in the Mueller probe into whether the president’s campaign conspired with Russians who attacked our electoral system.