Michelle Obama’s wisdom has been lost on many of her fellow Democrats.

The former first lady offered the perfect antidote to the negativity, the insults and innuendo that became Donald Trump’s mantra while campaigning for the presidency in 2016.

It isn’t happening. Trump continues to go low. Democrats, such as U.S. Rep. Maxine Waters of California, are going low right with him. So, too, is the film icon Robert DeNiro, who yelled “f*** Trump!” at the Tony Awards.

Waters says it’s OK to harass and hassle Trump administration officials when they’re off the clock. Actually, it isn’t OK.

Michelle Obama’s formula is the correct one. Go high when the other side goes low. 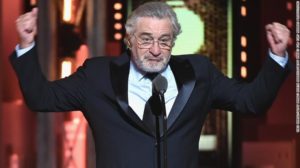 DeNiro, the Oscar-winning actor, took the stage at the Tony Awards and then bellowed “f*** Trump!” He drew huge cheers, including a standing ovation from the crowd jammed into the theater.

No surprise there, right?

I have been stewing about it since Sunday night. Here’s my conclusion.

DeNiro sank to Donald J. Trump’s level of insult. At a time when we need to lift up the quality of discourse, we had an actor — and a noted one at that — decide to drop an f-bomb on national TV.

We need some nobility in our political discussion. We don’t need to answer Donald Trump’s frequently juvenile, puerile insults with profane rants. It lends not a single constructive element to anything other than to rouse cheers, hoots and hollering.