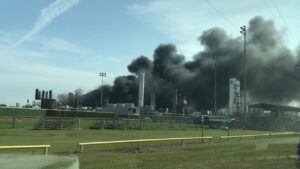 I heard the news this morning of that big explosion and fire way down yonder in Port Neches, Texas.

ABC News kept saying it was just east of Houston. The local Dallas-Fort Worth ABC affiliate, WFAA, referred to it more precisely: that Port Neches is just 15 miles south of Beaumont.

That kind of reference gets my attention because, as you might know, I lived and worked in Beaumont for nearly 11 years before my wife and I migrated from the Golden Triangle to Amarillo in 1995.

There have been no fatalities associated with the disaster. Some folks were injured. I worry about their health.

On a broader scale, I worry about our many Golden Triangle friends who live near the huge petrochemical and oil refinery complex throughout the Beaumont/Port Arthur region.

Petrochemicals and the refining of crude oil is the economic lifeblood of the region. When we moved to Beaumont in 1984, there was a school of thought that all one had to do to make a comfortable living was just get a high school diploma and then apply for work at one of the many petrochemical plants. They paid well. They were lifetime jobs if that’s what you wanted to do.

My former boss at the Beaumont Enterprise once told me that all those bass boats, expensive pickups and SUVs were paid for my the handsome wages earned at those plants.

There also is the danger associated with working at those facilities. I don’t recall seeing any major refinery fires explode during my time in Beaumont. The Port Neches fire, though, should remind us of the danger inherent in that line of work.

I haven’t even mentioned — until this very moment — the air quality issues associated with living in the proximity of those plants. That’s a story for another time.

I am worrying tonight, on Thanksgiving Eve, about the health of those who work in that environment and those — especially our many friends — who live nearby.