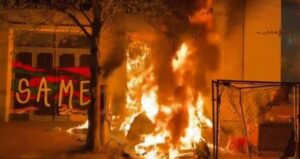 One day soon we are going to return to the city of my birth, where I came of age, where I met the girl of my dreams and where we brought our sons into this world.

I wonder what I am going to see on the streets of downtown Portland, Ore.

Media keep telling us of the riots that break out seemingly every night there. Police brutality is the subject of people’s anger. They are lighting fires, throwing rocks at cops, venting their rage over events that occur not just on their streets, but on streets in other communities.

I also hear the push back from those who say that downtown Portland remains as lovely a place as ever … for the most part! There are only “pockets” of damage brought by rioters.

The never-ending story: Rioting and arson in Portland – HotAir

When I tell people these days where I’m from, I occasionally get one of those side glances that suggests, “Oh, you’re from there? From that place? Where all the rioting is occurring?”

I once sought to go to Vietnam during the war because I had heard all kinds of conflicting tales of what it “was like” from returning veterans. The Army granted my wish. I found out for myself.

I am filled with the same sense of curiosity now about my hometown. I want to see it for myself and draw my own conclusions and I will pray that I won’t be horrified at what I see. 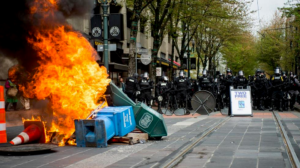 Donald Trump is turning my beloved hometown into a spectacle and it is making me sick.

Portland, Ore., is all over the news and for all the reasons it does not deserve this kind of attention.

Donald Trump has sent in federal agents to quell protests in favor of the Black Lives Matter movement. The agents are wearing camo fatigues, armed to the teeth with tear gas cannisters and assorted firearms, they are hauling protesters off the streets. Now comes word that Trump wants to do the same thing in Albuquerque and Chicago, maybe also in Kansas City and Miami.

What the hell is going on here?

U.S. Sen. Ron Wyden, D-Ore., is calling out the president on this heavy-handed response to what is happening in my hometown. Good for Sen. Wyden!

Trump’s response has done the opposite of what he says it has done. It has worsened the public mood, inflamed the city known more for its myriad coffee shops, craft beer and some of the finest downtown dining establishments anywhere in the country.

Now it is being perceived as a city that is erupting in anger. At whom? At the federal agents who have swooped in to crush a few skulls and to smother crowds under clouds of tear gas.

This is making me — a proud son of the City of Roses — sick to my stomach.