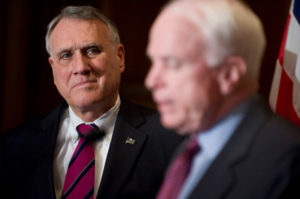 A part of me, though, wishes something different from Sen. Kyl, who rejoins his colleagues.

Sen. McCain, who died on Aug. 25 of brain cancer, was known as a maverick. He was courageous and unafraid to challenge partisan orthodoxy within his own GOP. He incurred the wrath of far-right conservatives who actually, with a straight face, accused McCain of being a RINO, a Republican in Name Only; such a preposterous notion is laughable on its face.

McCain sought a return to “regular order” in the Senate. He despaired of the cult of personality that has taken over many within the Republican Party, which has become the Party of Donald Trump. His clashes with the president — stemming in part from the insults and the disparagement that Donald Trump would hurl at McCain — became legendary.

My hope for Jon Kyl is that he follows his predecessor’s lead. He isn’t known to be as feisty as McCain could be when the occasion presented itself. Then again, he is occupying a seat once held by a man who became legendary in the Senate for the battles he fought with Democrats and Republican.

I realize fully that Sen. Kyl is his own man. He also works for Arizona’s 7 million residents. Perhaps many of them will express their view that Sen. Kyl pick up where Sen. McCain left off.

May the new senator give the president all the hell he deserves.