Nancy Pelosi generally has my support in her role as speaker of the House of Representatives and the person who is third in line to the presidency.

However, the California Democrat has stepped in some serious diplomatic dookey by visiting Taiwan during her multi-stop tour of Asia.

Why did the speaker choose to rile the People’s Republic of China by becoming the first speaker to visit Taiwan in a quarter-century? To what end? For what purpose?

Pelosi knows about the “one-China policy” this country has followed since it bestowed diplomatic relations on the PRC back in the late 1970s. When it did that, the United States cut off Taiwan, which prior to that period had been recognized as “China” by this country.

The PRC calls Taiwan a “renegade province” that it intends to return to the fold … one way or another.

I have been to Taiwan five times dating back to 1989. I am going to tell you that it is a vibrant, robust, militarily stout nation. However, it occupies arguably the most complicated diplomatic place on Earth. It has little diplomatic link with the rest of the world, which also operates under the one-China policy.

So, for Speaker Pelosi to in effect bestow some sort of blessing on Taiwan and anger the PRC in the process doesn’t make much sense.

The White House opposed her stopping in Taiwan. However, in our government system, the White House can object all it wants; there’s nothing it can do to stop the leader of a co-equal government branch from visiting the nation if she desires.

From where I sit, Pelosi could have accomplished what she intended to do — which was to affirm our nation’s economic and military support — over the telephone in a private conversation.

Instead, she chose to make a spectacle of herself and likely angered the president of the United States. 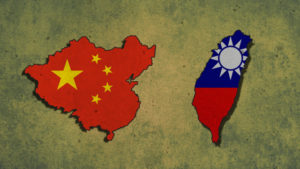 Donald J. Trump now is ready to adhere to one of the more complicated elements of U.S. foreign relationships.

It’s called the One-China Policy, which recognizes only one China … and it’s not Taiwan.

Not long after being elected president, Trump took a phone call from Taiwan’s president and then declared the United States ought to rethink its decades-old policy that recognizes the People’s Republic of China.

Bad idea, you know? The conversation between a U.S. president-elect and the leader of Taiwan was the first that had occurred since the United States recognized the PRC as the “real” China.

Taiwan is, in fact, a prosperous independent nation that broke away from the Chinese mainland at the end of a bloody civil war that erupted after World War II. Taiwan’s Nationalist government set up shop on Taiwan in 1949 and for three decades it was the recognized government of China.

That all changed dramatically in 1979 when the United States recognized the PRC, kicked out the Taiwanese ambassador. The United Nations booted Taiwan out, too, and welcomed the PRC.

Thus, the One-China Policy was born amid an interesting mix of economic and defense-related agreements that the United States still maintains with Taiwan. We trade with the Taiwanese, we pledge to protect them if the PRC decides to retake the island nation — but we do not recognize them diplomatically.

Trump spoke this week to Xi Jinping, the Chinese president, and reaffirmed out commitment to the policy that recognizes the PRC exclusively as the sole China.

As for Taiwan’s relationship with the PRC, that too, is a matter of delicate maneuvering. Taipei and Beijing allow travel between the countries; family members are allowed to communicate with each other.

Taiwan also believes in a “One China Policy,” but insists that the island nation — not the mainland — is the “real China.” Here’s the deal: Most of Taiwan’s inhabitants were born on the island and consider themselves to be “Taiwanese.”

The president, though, needs to settle down and stick with a policy that recognizes only one China. To do anything different is to insert the United States directly into the middle of a simmering dispute between China and Taiwan.

The president-elect told Fox News Sunday that he doesn’t feel obligated to follow what’s known around the world as a “One China Policy.”

Neither country recognizes the other diplomatically. Taipei has no PRC embassy, Beijing has no Taiwanese embassy. Almost the entire rest of the world recognizes the PRC as the sole China. The United States of America has recognized the PRC since 1979, at which time it ended relations with Taiwan.

Now we have the president-elect of the  United States saying he isn’t bound to follow a One China Policy. Trump told Chris Wallace on Fox News Sunday: “I don’t know why we have to be bound by a One China policy unless we make a deal with China having to do with other things,” he said. This is ridiculous on its face.

The communists who now govern the PRC took the country by brute force in a civil war that erupted after World War II. The nationalist Kuomintang party, which governed China under the rule of Chiang Kai-shek, fled to Taiwan in 1949 and set up a government in exile.

China declared Taiwan to be a “renegade province” and vowed to take it back, by force if necessary. The world for decades didn’t recognize the PRC as the legitimate Chinese government; it gave that recognition to Taiwan.

President Nixon changed all of that by going to China in 1972, shaking hands with Mao Tse-Tung and giving birth to a new bilateral relationship. President Carter sealed the deal in 1979 by offering diplomatic status to the PRC.

“Smart Person” Trump, though, decided to roil the waters by speaking over the phone with Taiwanese President Tsai Ing-wen, who had called to congratulate him for being elected president. The PRC is damn angry! They have expressed “serious concern” over that breach of protocol.

Meanwhile, some Republican hardliners at home are cheering the president-elect for this outreach.

There is a crystal-clear reason why Taiwan doesn’t just declare its independence from the PRC and, thus, set up a de facto second China. Some officials expressed it to me during my first visit in 1989 to the island nation. “We take these threats” of military retaliation by the PRC if Taiwan declares its independence “very seriously,” they said.

And they should. The PRC possesses a gigantic military apparatus — in addition to its enormous economic impact around the world.

Taiwan functions as an independent nation. It has trade relations with many countries around the world. The United States is sworn to defend Taiwan in the event of an attack by the PRC. It does not belong, though, to the United Nations or to the World Health Organization. It has been shut out of virtually all worldwide cooperative agreements.

If there ever is to be anything other than a One China Policy enacted, that has to come from Beijing and Taipei. Those two nations have to reach an agreement of some sort that recognizes that Taiwan never will be assimilated back into the mainland.

Will that happen? Taiwanese officials believe to this day that their future remains on the mainland. They are intent on waiting for the communist system to fail in Beijing, just as it failed in Moscow. That might be a pipe dream, but it is their dream.

The president of the United States needs to butt out.

A smart person knows at least that much.