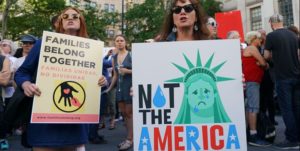 I am heartened to learn of some second thoughts among Donald J. Trump’s most ardent supporters regarding this ghastly policy of “no tolerance” along our southern border.

It’s the policy that allows U.S. Border Patrol and immigration agents to seize young children from their parents as they enter the United States illegally.

Trump blames a “Democrat bill,” which doesn’t exist, for the policy.

U.S. Attorney General Jeff Sessions says the Bible — as stated in Romans 13 — gives the Trump administration all the authority it needs to invoke this intensely cruel policy.

Now we hear from, say, the Rev. Franklin Graham, one of the president’s most ardent supporters. Graham has declared his opposition to the policy.

Oh, and then former first lady Laura Bush has weighed in with an op-ed column in which she declares the policy “immoral” and said it “breaks my heart” to learn of children being put in cages along our southern border.

The current first lady, Melania Trump, has waffled a bit, calling on “both sides” to cease this humanitarian crisis. I understand the first lady’s difficult spot. But “both sides” aren’t required.

Only one side is needed to fix it. That would be the president, who can end this hideous policy with a phone call and a signature. 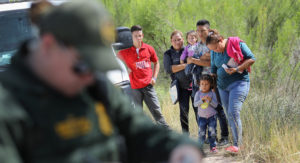 Heartless public policy is an ugly thing to watch unfold.

Donald J. Trump actually said he hates the sight of children being taken from their parents at the nation’s southern border. Then the president blurted out yet another lie, that congressional Democrats are responsible for enacting a law that the administration is following.

Except that there is no law. What is unfolding in front of us is an administration directive under a “no-tolerance” immigration policy.

Now we hear that first lady Melania Trump has weighed in on this tragic event. As Politico reports: A spokeswoman for Melania Trump said Sunday that the first lady “hates to see children separated from their families” and hopes both parties can reach a solution. “She believes we need to be a country that follows all laws, but also a country that governs with heart,” the statement said.

This is a heartless, callous and totally unnecessary policy. The administration enacted it to “deter” illegal immigrants from entering the country. It figures that undocumented immigrants will think twice or thrice about entering the United States if they face the prospect of their children being taken from them at the border.

But … seriously? Do we really want to be known around the world as the nation that separates children from their parents with no clear plan on when, where or how they will be reunited?

This isn’t the basis on which this country was founded. It isn’t the basis for the rest of the world pursuing the dream of hope, liberty and opportunity in the Land of the Free.

A nation that, in the words of the first lady, “governs with heart” can find a solution to this hideous public policy.

One way to start would be to persuade the president to stop lying while he blames this crisis on Democrats.