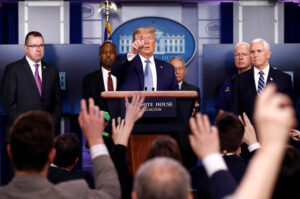 I want to push back against those who have taken to blaming the media for Donald Trump’s wholly inadequate response to the coronavirus pandemic.

Michael Goodwin, a columnist for the New York Post, posited an opinion that the media are more interested in taking Trump down than on reporting the facts. Goodwin writes:

In the real world, events are unfolding at a pace and scale impossible to comprehend. But at too many news outlets, the aim is not to inform. It is to render the harshest possible judgment on the man journalists love to hate.

Goodwin’s mind- and heart-reading ability must be astonishing in the extreme. To my way of thinking, he is letting his own bias get in the way of anything sort of rational analysis.

The media are trying to pry the truth out of a president who so far in his term in office has demonstrated incessantly an inability to offer the truth. Reporters and editors deal with truth. It is what they peddle as they seek to chronicle the news of the day, to inform the public about what their government is doing for them or, sadly, to them.

The coronavirus pandemic has gotten away from the federal government. It is running rampant now throughout the nation. We haven’t seen the worst of it. My hope and the hope of all our citizens — and that includes media representatives — is that we’ll get to the worst far sooner rather than later. Then maybe we can start to return to some semblance of normal life.

The media’s task is to tell the public whether their government is doing what it can to make that happen.

Donald Trump just happens to be the head of the executive branch of government. He hasn’t performed adequately. The media are reporting on his decisions and the processes that lead to them.

I’ll provide Goodwin’s column here. I also will stand by my pushback against those who seek to blame the messenger who insists on doing an unpleasant job, which is to deliver bad news.

High Plains Blogger has sought to refrain from posting pictures such as this one, but in this instance, I cannot resist.

The woman on the right is Melania Knauss, who would become known to the world as Melania Trump. It was published by the New York Post, a paper owned by Rupert Murdoch, one of Ms. Knauss’s future husband’s better friends and political allies. See the Post article here.

I am trying to fathom the reaction if we were to see pictures of, say, Michelle Obama, Laura Bush, Hillary Clinton, the late Barbara Bush or the late Nancy Reagan in this kind of context.

We live in a new era, dear reader.

Mike Huckabee is entitled to believe what he believes about homosexuality.

I just happen to think he’s mistaken when he compares a person’s sexual orientation to drinking alcohol or cursing in public.

That’s his latest take on an issue that is likely to be a key driver in the upcoming 2016 Republican presidential nomination campaign.

Huckabee is a former Baptist preacher and a one-time Arkansas governor. He told CNN’s “State of the Union” that while he opposes gay marriage he wants to be tolerant of those who choose to marry someone of the same gender. As the New York Post reported: “I accept a lot of people as friends maybe whose lifestyle I don’t necessarily adhere to, agree with or practice. Doesn’t mean that I can’t have a good relationship with anyone or lead them or govern them.”

“We’re so sensitive to make sure we don’t offend certain religions, but then we act like Christians can’t have the convictions that they have had for over 2,000 years,” he said.

I get that, too. I also am a practicing Christian, but I happen to have a different view of the issue than the former governor.

The notion that many folks have that someone’s sexual orientation is a lifestyle choice simply defies logic, as explained to me over many years by my own gay friends. To a person, whenever the subject comes up — and I don’t bring it up myself, ever — about their orientation, they say essentially the same thing: “Why would I choose to be scorned, ridiculed and vilified?”

I haven’t found the answer to that one.

Bill Cosby has — more or less — broken his silence on the allegations of sexual abuse that have piled up on him.

The Hollywood Reporter link isn’t very long, as Cosby didn’t talk long to the New York Post reporter interviewing him. He made a reference to his lawyer not wanting him to speak to the media.

The allegations are serious and, to be quite candid, are sounding more believable with each new alleged victim coming forward. The most notable accuser has been supermodel Beverly Johnson, who has accused Cosby of drugging her and having his way with her.

My major source of skepticism about all of this centers on the length of time that has passed since these alleged incidents occurred. Moreover, Cosby’s never been charged with a crime.

Still, in the comments that have come forward, either from Cosby himself or from his legal team, I am still waiting to hear or read the “magic words” from the accused.

They are: “I did not commit these acts.”

It troubles me terribly that Cosby hasn’t declared categorically in public that these alleged acts never occurred. It also troubles me, if it’s the case, that his lawyers might have instructed him to keep quiet on that specific point.

The silence from this entertainment icon is speaking volumes. Maybe I’m just hearing things, so to speak.

My goodness, I hope that’s the case. I am fearing the worst.