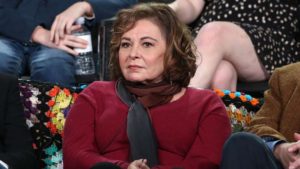 A two-day story has been given more life by none other than the president of the United States.

Yep, Donald J. Trump has weighed in on ABC-TV’s decision to cancel “Roseanne” because of a stupid and blatantly racist tweet by the star of the show, Roseanne Barr.

She compared former Barack Obama adviser Valerie Jarrett to an “ape.” Oh, yes. Jarrett is African-American. Barr’s tweet also had a touch of Islamophobia, too, referring to the “Muslim Brotherhood.”

ABC canceled “Roseanne” on the spot.

Trump’s response was to fire off a tweet of his own wondering why ABC didn’t react to all the negative things that have been said about him on the network.

Your plate should be overflowing with important matters. You know, things like that on-off-again summit with Kim Jong Un, trade wars with China, keeping the Middle East from exploding in flames.

Instead, this tweet tyrant in chief brings more attention to Roseanne Barr, a noted fan of the president.

Should this story be on millions of Americans’ minds right now? No. It should be set aside. The head of state has bigger fish to fry. If only the president of the United States would butt the hell out.