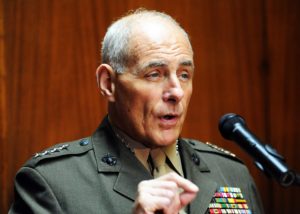 I had such high hopes.

Oh, but they’re being dashed almost daily by the president of the United States.

My hopes rested with the appointment of a decorated combat veteran, Marine Gen. John Kelly, as White House chief of staff. I had high hopes that Kelly would be able to tell Donald J. Trump to cool it with the tweets, bring some discipline to the White House operation.

As the president has demonstrated, Kelly so far has been unable to deliver on that first promise.

Trump continues to fire off tweets in the early-morning hours. He is continuing to act like the cyber bully his wife, Melania, has pledged to combat in her role as first lady.

The president then blabbed away about the “fire and fury” he intends to bring to North Korea if the communist government continues to “threaten the United States.”

Do you suppose the White House chief of staff signed off on that careless, reckless and dangerous remark? Me neither.

Gen. Kelly showed some very early promise when he showed former communications director “Mooch” Scaramucci within hours of reporting to work at the White House.

Much of the early handicapping, though, has looked dimly at Kelly’s chance of surviving long as chief of staff. The pundits have wondered whether the president’s undisciplined habits will be more than the buttoned-down Marine general can handle.

I fear they might be correct. But, hey, the White House is full of surprises. There might even be a pleasant one in store for us — if Kelly can persuade the president to start acting like the president.

Let’s take stock for a brief moment of an organization that Donald J. Trump once called a “fine-tuned machine.”

* National security adviser Michael Flynn is forced out after 24 days.

* Reince Priebus is forced out as White House chief of staff after seven months, the shortest tenure in history.

* Anthony Scaramucci gets the boot as the new communications director after just 10 days, setting another record for public service brevity.

Five top White House staff members are out the door. And yet … the president once called his administration a “fine-tuned machine” that has been the most productive administration in U.S. political history.

All that productivity has resulted in precisely zero major legislative accomplishments. Republicans now control the White House in addition to Capitol Hill. They wanted to toss out the Affordable Care Act, but failed, with little expectation now that they’ll be able to accomplish their No. 1 mission in life.

You may choose to believe or disbelieve my next statement, but I’ll make it anyway.

I do not wish failure on this administration. I am trying to take the higher road than the one taken by some right-wing radio talk show blowhards who wanted President Barack Obama to fail during his two terms in office.

However, the president needs to stop telling us lies about fine-tuned machines and all that alleged productivity. All roads leading to the White House are strewn with wreckage.

The task now falls on the new White House chief of staff, John Kelly, to clean it up. 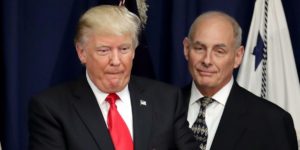 The president predicted that Kelly would do a “spectacular job” in the West Wing. I’m going to presume a bit here, but it looks as though the new chief of staff is off to a rip-roarin’ start.

Within hours of being sworn in, Kelly got the president to give White House communications director Anthony “Mooch” Scaramucci the heave-ho — 10 days after Trump hired him! 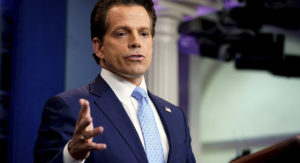 There’s no nice way to say this, but Mooch conducted himself like a maniac in his White House job. He has no comparable experience that would have commended him for the job and, oh brother, it showed.

Kelly brings an entirely different skill set to his chief of staff job, which he assumed after Reince Priebus got the axe this past week. Kelly is a retired Marine Corps general; he has 45 years of service in the military; he is a combat veteran — and a Gold Star father, having suffered the terrible tragedy of losing a son in combat in Afghanistan.

The president’s prediction of a “spectacular” performance by his new chief of staff was delivered quickly by the new guy.

Gen. Kelly has a long, steep mountain to climb before completing the task of converting the White House from an Animal House into a “fine-tuned” center of government operations.

His first full day at his new post suggests he is up to the task.

Then again, it’s only been a day. Gen. Kelly still has yet another wildfire to control. That would be the president of the United States.

John Kelly is about to take on the job of his nightmares.

He is the next White House chief of staff, replacing Reince Priebus, who was booted out of his job this week by the president of the United States, one Donald John Trump.

The president, moreover, has hired a communications director who is exhibiting the conduct of a madman. Anthony “Mooch” Scaramucci went on a profanity-laced tirade and predicted correctly that Priebus would be gone by the end of the week.

Now into this maelstrom comes Kelly, a retired Marine Corps general. He is a no-nonsense general-grade officer. He has served his country heroically and with supreme honor. He moves into the White House from the Department of Homeland Security, where he served as secretary.

It’s the Kelly vs. Mooch situation that ought to cause concern throughout the massive federal government.

Mooch reports to the Donald Trump. Tradition — something for which the president has zero regard — has made the communications director answer to the chief of staff.

Here’s my question: How long will it take Gen. Kelly to slap some sense into Mooch and tell this loudmouth that the chief of staff controls the message?

It’s being said in recent hours and days that no previous president would have put up with the hideous tirade that Mooch launched against Priebus. Mooch called Priebus a “schizophrenic,” adding a colorful f-bomb adjective in front of that term.

Can you imagine someone referring to, say, previous WH chiefs Leon Panetta or James Baker III with that kind of language?

With all of that said, Gen. John Kelly is walking into a White House that is in an utter state of confusion and chaos. It’s a direct reflection of the man who refused to let the previous White House chief of staff do his job.

Moreover, it all reflects directly on the incompetence demonstrated daily by Donald John Trump Sr.

Good luck to you, Gen. Kelly. You will need every bit of it.