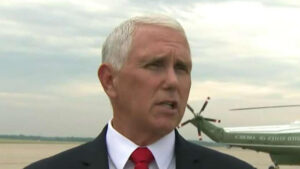 This brief comment is directed at you, Mr. Vice President.

I understand you took a tour today of a detention center in McAllen, Texas, where Border Patrol and Customs officials showed you the crowded conditions in which authorities have placed these migrants.

I am going to ask you, sir, to spare the nation any phony platitudes about how “well” the detainees are being treated. You said you “weren’t surprised” at the “tough stuff” you saw.

However, I am half-expecting you to issue statements denigrating the complaints that are coming from other detention centers, such as the one in Clint, near El Paso. Frankly, Mr. Vice President, I wish you had gone to that facility to see up close what all the protests have been about.

Mr. Vice President, there are too many reports of mistreatment of children in Clint. You cannot ignore what I know you are hearing. Oh, sure, the president is in full denial and given that you’re the No. 2 man, you must feel the need to parrot what the No. 1 man in the government is saying.

Except that it isn’t true, Mr. Vice President. Yes, you got a taste of what these people are enduring.

For you to downplay, if not outright deny the mistreatment of migrants — especially the children — makes you complicit in the lies that Donald Trump keeps blathering.

Shame on you both.