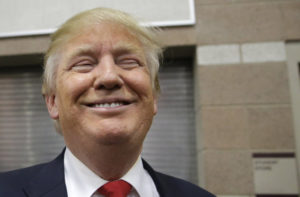 How can a major news organization cover the president of the United States when the president has a “fiduciary” connection to the network?

Media Matters is referring to Donald J. Trump’s continued association with an NBC-TV show, “The Apprentice,” where he will remain as an executive producer.

NBC — and its affiliate networks, MNSBNC and CNBC — cannot possibly cover Trump with any degree of impartiality if Trump is getting paid by NBC for his relationship with “The Apprentice,” according to Media Matters. What if the network felt compelled to cover the president aggressively? How does that square with the possibility that negative news coverage would harm the president’s public standing and, by association, harm the TV show he serves as an executive producer.

As Media Matters declared: “There is simply no way that citizens can trust the reporting of NBC News, CNBC, and MSNBC. Executives have put hard working reporters at these outlets in a completely untenable spot: No amount of disclosure is sufficient when the network is financially invested in the president.”

The right-wing mainstream media cannot get enough of these trumped-up “wars.”

Fox News annually declares there to be a secular “war on Christmas.” The only people waging war on Christmas are the retailers who keep pushing out the notion that it’s all right to camp out overnight waiting for the stores to open on Black Friday. Get in ahead of the rush … but please don’t punch out the shopper who cuts in ahead of you to get the toy you had targeted.

There is no war on Christians’ holiest holiday. It’s a figment of the right-wing mainstream media marketing geniuses who look for ways to boost their ratings, allowing their on-air personalities to brag about how they’re kicking the stuffing out of the rest of the “mainstream media.”

Churches are still informing congregants about what Scripture says about Easter, about how Jesus rose from the dead after being crucified. Believers all over the world celebrate this holiday with all due reverence. My family and I do.

“War on Easter”? It ain’t happening.

Let’s knock it off, shall we?

Having already criticized a State Department spokeswoman for suggesting that job creation should be a strategy in fighting the Islamic State, I am struck by the amazing outrage by right-wing media over her comments.

I hope I stipulated clearly that I wouldn’t join the right-wing hysteria in questioning President Obama’s commitment to destroying ISIL. Others have done enough of that already. Some of the comments are contained in the link attached to this blog post. Take a look. They’re pretty wild.

Perhaps Harf’s comments got blown out of proportion, and weren’t viewed in the totality of the message she sought to deliver on MSNBC’s “Hardball” show with Chris Matthews. I regret not digesting fully all of what she said, which included comments about the administration’s intention to keep killing terrorists as the war on terror rages on.

If working quietly with nations that produce terror cells to alleviate the root cause of people taking up arms against the United States and our allies is part of an overall strategy that includes waging all-out war, then by all means let’s proceed.

Let’s never lose sight of the undeniable fact that we’re dealing with a nasty enemy, as Presidents Bush and Obama both have understood.

You know, if I had given it a moment’s worth of thought, I might have been able to predict that one conservative mainstream media outlet would criticize the president of the United States for quoting Scripture.

The thought didn’t cross my mind. Then I saw this item from Media Matters, an acknowledged liberal watchdog organization.

(Check out the link where Elizabeth Hasselbeck says she “got goosebumps” when President Reagan cited Scripture back in 1981.)

They chided “Fox and Friends” for criticizing President Obama for having the utter gall to quote the Bible when talking about his executive order regarding immigration reform. Why, those “Fox and Friends” talking heads just couldn’t understand how the president — whom they have criticized in the past for his alleged failure to acknowledge his Christian faith — could do such a thing in this context.

I need to stop hyperventilating.

Let’s understand something about the 44th president. He’s declared time and again that he believes Jesus Christ is his savior. He reads the Bible and has been a Church of Christ member for, oh, a long time. Barack Obama also uses Scripture passages frequently when making some point, just as all of his predecessors — from both political parties — have done since the beginning of the Republic.

May we stop applying these ridiculous double standards when analyzing the president’s statements on public policy?

OK. I’ve made the request for fairness in covering these things. I’m quite sure no one at Fox News will give it any consideration.

Listen to the talking heads on some cable news channels, or read reports in mainstream newspapers and you get a dire picture of President Obama’s political standing.

The organization points out correctly that Barack Obama’s standing among Americans has remained unchanged for the past year.

Why do the media keep harping on something that’s, well, untrue?

Holy smokes! Does that constitute a president whose standing is headed straight for the dumper? I think not.

It’s interesting, too, that Media Matters isn’t targeting just the right-wing media — a favorite target — in critiquing the bogus reports of Obama’s standing. It cites mainstream media across the spectrum, even those dreaded “liberal media” outlets that supposedly can say nothing critical of the president or his friends in Congress.

The link attached is most interesting and it puts the president’s standing in a context that bears little resemblance to what the media are reporting.

The above link is a short essay posted on Mother Jones, a left-wing political website.

The blog posted here is from a guy named Kevin Drum, who invites viewers to watch Fox News for an extended period to fully understand how the network has helped redefine the American political conservative movement.

Drum writes: “Over the years, the more that I’ve thought about the evolution of conservative politics over the past few decades, the more I become convinced that Fox News is really at the center of it. Sure, it all started with a base of Reagan and the Christian Right and talk radio and the Republican takeover of the South. But Newt Gingrich was the game changer. He’s the one who brought conservative politics to a truly new, truly unprecedented level of toxic rancor.”

I don’t watch Fox News much any longer. I used to tune in to a few news shows. Then I, too, became disinterested in the Fox bias, which of course ran counter to my own bias — which I admit to freely and without apology.

This notion of watching a media outlet with which one disagrees takes me back to a time, back in Beaumont, when I did the same thing.

I was talking at the time to the then-mayor of Beaumont, Maury Meyers, a fine gentleman with whom I had a nice relationship. I complained to Meyers about Rush Limbaugh’s TV show, which aired briefly in the early 1990s. Maury invited me to watch more than a single episode before passing judgment on Limbaugh’s show.

I did as Meyers suggested — and concluded after a week of watching Rush’s rants that he was worse than I imagined.

I wrote in a column, after subjecting myself to the ordeal, that Limbaugh was to political commentary what Willard Scott was to weather forecasting. Neither man really knew anything about the subjects with which they dealt. “Willard Scott makes me laugh,” I wrote at the time, “Rush Limbaugh makes me sick.”

Fox News is a major player these days in the on-going American political drama. Drum concludes:

“Yes, the tea party has won. But it won because of support from Fox News. In reality, it’s Fox News that won. And for all that Fox gets a lot of attention, I still wonder how many non-conservatives really watch it. Not just the occasional clip on Jon Stewart or Media Matters that’s good for a laugh or an eye roll. How many really sit down occasionally and take in a full evening? Or a whole day? Because that’s the only way you’ll really understand.”

Yep. I do understand.

Media Matters is a left-wing journalism watchdog group that takes great delight in exposing Fox News Channel’s big lie that it is the “fair and balanced” cable news network.

I agree — usually — with Media Matters’s take on Fox.

However, I think the group if off base in attacking ABC News for hiring conservative radio talk show host Laura Ingraham as its newest “contributor.”

Why go after Media Matters on this one?

Well, I am one who likes to see news/commentary outlets offer wide-ranging points of view. Do I agree with Ingraham’s world view? No. However, she isn’t the first conservative voice to be heard on ABC’s “This Week” Sunday news talk show. Weekly Standard editor Bill Kristol is a regular on the show, as was syndicated conservative columnist George Will before he left ABC to join the Fox News Channel’s Sunday talk show as a contributor.

ABC, as does NBC’s “Meet the Press,” quite often invites conservatives and liberals to sit at the same round table to discuss issues of the day. They debate. They even argue.

What is so wrong with that?

CNN, arguably the pioneer news network, does much the same thing on any of its myriad political talk shows. Newt Gingrich and Van Jones — a rightie and a leftie, respectively — are regulars on CNN’s revamped “Crossfire” program.

I don’t see why ABC is getting so worked up over Ingraham. Yes, she’s provocative and she occasionally crosses — what I consider, at least — the line of good taste and decency in making her points.

You’ve heard the old term about the “marketplace of ideas.” It’s broad, wide, deep and varied. Let all voices be heard. We’ll be the judges of who’s right or wrong.