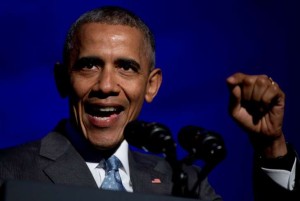 President Obama has thrown down on the national media, which he said aren’t doing their job properly.

The current political climate, the president said, is due partly because the media haven’t challenged presidential candidates’ falsehoods, outrageousness and manipulation.

Obama spoke to a media gathering and said the rest of the world is dumbfounded at what’s happening to the “crazy politics” that has infected the United States.

Here’s part of what the president said: “A job well done is about more than just handing someone a microphone. It’s to probe and to question and to dig deeper and to demand more. The electorate would be better served if that happened. It would be better served if billions of dollars in free media came with serious accountability, especially when politicians issue unworkable plans or make promises they cannot keep.”

Got it, Mr. President.

But here’s the catch. The media are considered part of what’s ticking off much of the electorate.

As someone who’s still associated with the media, I happen to believe the president is correct to assert that the media need to do better. We always can do more to provide context and to check all the facts before running with them.

It’s the suggestion, though, that greater media scrutiny — in this particular climate — is going to flip the switch on in voters’ minds and make them see the light, the truth and the way.

Instead, they’re increasingly likely these days to “double down” on what the candidate says and then blast the media for “lying” about their guy’s message.

I believe we are in a classic “Catch-22” situation.

Thanks anyway for the advice, Mr. President. 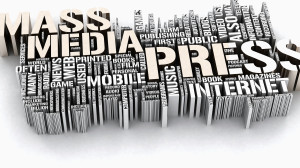 I had a marvelous opportunity this evening to speak to some nice folks about the state of play in media, politics, and the world in general.

The Potter/Randall Democratic Club asked me to offer some observations about this and that.

They figured I needed something to do now that I’ve been kinda/sorta retired for more than three years. A number of the folks there are acquaintances of mine. A couple of them were contributors to the Amarillo Globe-News opinion pages over the years, writing letters and sending in guest columns for my consideration.

I truly enjoyed meeting new folks and getting reacquainted with old friends and sharing some thoughts about the condition of our political and public policy world.

It occurred to me as I began my remarks that one of the true joys about being able to speak for myself is that I no longer represent someone or something else. I no longer am on a media outlet’s payroll, which enables me to speak my mind and to offer thoughts on this blog.

Sure, I do write for a couple of broadcast outlets these days; I write part time as a freelancer for KFDA NewsChannel 10 and Panhandle PBS, which means that I am not counted as being employed by them.

It occurred to me as I began my remarks that I am officially unfettered, untethered, unencumbered, unleashed, unbound, unrestricted, uninhibited … well, you get the idea. I get to speak my mind — whether I’m standing at a podium or offering comments through this blog.

Sure, my career as a full-time print journalist ended unhappily for me back in August 2012. I wasn’t entirely sure at the very moment I realized my career had ended whether I could bounce back. I did manage to pick myself up; I got off the deck and along the way I discovered a side of my adaptability I didn’t realize I possessed.

Thus, am I now glad my tenure at the Globe-News came to a screeching halt?

Let’s discuss this one a little.

OK, I’ll start. I am tired of the Ferguson, Mo., story. Does anyone else out there share that thought?

We know many of the facts already. A young African-American man, Michael Brown, was shot to death by a white police officer in the St. Louis suburb. Residents protested. The protests got violent. The Ferguson police responded with a very heavy hand. The state police took over. The governor declared a curfew and called out the National Guard to keep the peace.

The cable news networks have been all over this story. They’re covering it like a blanket. 24/7, or so it seems.

The Ferguson story, I think, gets to the heart of what sometimes ails TV journalism. Reporters get fixated on stories and then beat them into the ground.

I grew tired of the Trayvon Martin story, which had a similar context. I grew sick and tired of the Natalie Holloway story — remember her? She was the Alabama teenager who disappeared in Aruba. The networks were all over that one for seemingly forever. I got sick of the Malaysia Airlines jetliner disappearance story. CNN was the worst, reporting “breaking news” when none existed. One news anchor asked someone if it was possible if the plane flew into a black hole; he was then reminded by the guest that a black hole would swallow the entire solar system.

What am I missing in this Ferguson story?

It’s not that that my heart isn’t broken over the death of the teenager. Or that the police made a mess of their response to the protests. Or that the state police captain who’s taken charge of things hasn’t acted with nobility and courage. I get all of that. I’d like answers to questions surrounding the militarization of the police department and whether minorities are being targeted unfairly by police. How about the Ferguson political structure? It needs to change. A majority black community needs more African-Americans in positions of authority.

I just cannot watch it at length any longer. I’ve grown tired of the media saturation, just as I tired of one cable network’s obsession with the Benghazi tragedy in Libya and its coverage of the IRS non-scandal.

Is there something wrong with me?