Man, I cannot make up my mind on the issue of whether we ought to legalize marijuana.

I have commented in the past on this blog about my “open mind” on the issue. It’s still open, but it closes from time to time.

At the moment, my mind hasn’t slammed the proverbial door shut, but I am wavering.

States are decriminalizing marijuana use. Oregon, the state of my birth, was among the first to do so. It’s two Pacific Cost neighboring states — Washington and California — have done the same. We moved away from Oregon in 1984, so I am not entirely well-versed on the effect that decriminalization has had on my home state.

I am not prepared to endorse the idea of decriminalization. Nor am I ready to condemn it. So, I guess my mind is open.

There might be a middle ground I can endorse: turning it into a civil penalty, sort of like a traffic ticket. You pay the fine and go about your business.

Some progressive members of Congress are talking openly about legalizing marijuana use. I’ll have to get back to you on that one. 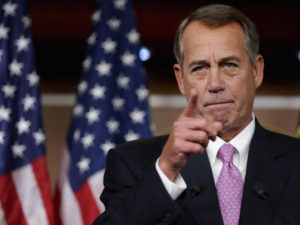 Well now. Former U.S. House Speaker John Boehner, who used to oppose legalization of marijuana, is now on board with it.

He says he wants MJ legalized, marking a dramatic shift in the Ohio Republican’s former stance.

In truth, he joins a list of prominent Republican public officials to extol the virtues of legalizing marijuana.

Former Secretary of State George Schultz is on board; so was the late conservative icon William F. Buckley; same for noted GOP-minded economist Milton Friedman; the late Sen. Barry Goldwater, too.

Former Speaker Boehner, as the West Texas saying goes, is walking through some mighty tall cotton by joining those individuals.

According to National Public Radio: “I feel like I’m like your average American who over the years began to look at this a little differently and I think over the last five years my position, it has kind of softened up and softened up,” Boehner said.

I suppose I could add that being liberated from the whims and wishes of political constituents who might believe differently had something to do with Boehner’s change of heart.

I am leaning that way myself. 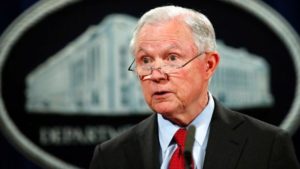 While he was running for president of the United States, Donald J. Trump said that states should be left to determine the legality of smoking pot.

Now that he is the president of the United States, Trump seems to be saying something else. Or, at least he’s allowing the attorney general to say it for him. AG Jeff Sessions has repealed relaxation of federal prosecution of marijuana laws. He has sicced federal prosecutors loose on those who are accused of smoking pot illegally.

Now comes a question: Which is it, do states’ right prevail on this matter or is this a matter where federal policy overrides them?

California has just legalized the sale of “recreational marijuana,” joining several other states and the District of Columbia in this initiative.

The AG is having none of it.

But to whom does the attorney general answer? Let’s see. It’s the president. And this president is on record saying that states should be left to set marijuana-use rules and laws.

Didn’t he say that? Didn’t he mean it? Wasn’t he speaking from his gut, or his heart, or did he make it up as a throwaway line?

The order Sessions rescinded, of course, came from President Barack H. Obama’s Department of Justice. DOJ said in 2013 it wouldn’t concern itself with marijuana court fights in states where its use is legal. Sessions is taking another attitude altogether.

However, is he speaking for the department he runs or for the president of the United States — or both! If so, has the president changed his mind?

The Texas governor endorsed the idea that states should set drug laws, which caused some folks in the reform movement thinking, as the Texas Tribune’s Julian Aguilar reports, that the theory of relative is a sham or that Pink Floyd’s estranged founder might rejoin the band.

Don’t count on a change of heart in Texas.

Frankly, though, it would be refreshing to see the state at least take a hard look at whether we’re punishing those who smoke grass a little too harshly.

Should we follow the lead of Washington and Colorado and legalize its sale and use? That idea, too, is worth considering.

Perry went on to endorse the drug court program used in many Texas counties, which includes Potter and Randall counties. Perry spokesman Rich Parsons said: “The governor does support the system of drug courts in Texas that have proven successful in diverting those who qualify away from incarceration and into rehabilitative programs that reduce recidivism and help people end their drug use.”

My own feelings about marijuana penalties have tempered quite a bit in recent times. I’m thinking it’s time to reconsider whether the strict laws — particularly the mandatory sentencing policies handed down by the federal government — do anything other than clog our lockups with offenders who’ve done else wrong.

Some folks think the tide is turning in favor of loosening these penalties. Perhaps it is.

I’ll need some more convincing that Texas at least is nearing the head of the curve, rather than lagging so far behind it.

Now that marijuana is a legal substance in Colorado, I’ll await along with the rest of the nation — if not the world — to see how this all plays out.

I’m not yet ready to climb aboard fully on the Legalize Pot Bandwagon, but I’m ready to give this notion a chance to see what transpires in at least one of our 50 states.

We’re getting some intelligent debate now about pot legalization. Some people argue that it’s going to produce a large influx of young users and that it will inhibit their thinking capacities. Others say that it will generate income for cash-strapped state governments that they can use to combat drug abuse. Some advocates say it’s time we decriminalize an activity that has become as common as cigarette use and alcohol consumption. Others suggest the federal sentencing guidelines are OK, while still others point to the overwhelming racial disparity in our jails and prisons of people incarcerated for drug use.

My sense is that the tide of history is turning toward eventual legalization of this substance.

I’ve spent my life opposing it. I’m not so sure any longer. The older I get the more open-minded I become. I guess that’s a good thing.

Am I going to light up? Never. Not going to happen. As the columnist David Brooks wrote, “Been there, done that.” I’m finished with it.

I think we’ll know the results fairly quickly, perhaps by the end of this year, about the result of marijuana legalization. I’m no longer convinced it’s going to wreck society as we know it.

I might be wrong about that … but I doubt it.

Some people get more crotchety in their old age.

Others get more, um, reflective; they are more able to see the big picture.

I think — at least I hope — I am in that latter group.

I’ve spent a lifetime to date believing we should maintain marijuana’s illegal status. People should be punished for using the devil weed. That was how I used to think. I’m beginning to feel differently about that — and a lot of other things — as I grow older.

The states of Washington and Colorado are about to effectively legalize its use. A recent “60 Minutes” report declared that there are now more medical marijuana dispensaries in Denver that McDonald’s and Starbucks combined. It’s going to be taxed and regulated by the state. Coloradoans will be able to purchase the stuff essentially over the counter.

My home state of Oregon also has liberalized its marijuana laws. Other states have followed suit.

Meanwhile, still other states have continued to drop the hammer — as has the federal government with its minimum sentence policy — on those caught carrying and/or consuming small amounts of weed. Texas is one of them, where state police patrols are picking up drivers of vehicles loaded with grass on those so-called “routine traffic stops.”

Full disclosure here: I have smoked it. A very long time ago, when I was quite young, before my sons were born and mostly before I got married. My dad once asked me straight up: Have you smoked marijuana? More disclosure: I didn’t have the courage to say “yes.”

That was then. Dad is gone now and wherever he and Mom are, they know the truth. I haven’t touched the stuff in more than 40 years and, oh yes, I did inhale.

Is it sane to keep prosecuting people for consuming a substance that is no more addictive than, say, nicotine or alcohol? How do I know that? Well, I never became hooked on it, nor on alcohol. I did get hooked on cigarettes, but managed to quit cold turkey nearly 34 years ago.

That’s just me. I am aware, however, that millions of others can make similar claims.

I’m aware that I’m late getting into this discussion. What’s fascinated me over many years has been the advocacy of marijuana legalization by prominent conservatives: William F. Buckley, the economist Milton Friedman and former Secretary of State George Schultz, to name just three, all have spoken in favor of legalization. The conservative movement’s godfather, the late U.S. Sen. Barry Goldwater, did as well.

It’s not just the flaming liberals out there calling for this sea change.

It well might be time to catch this wave.