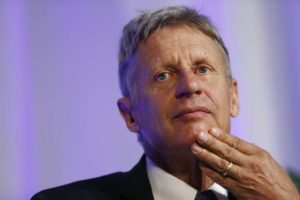 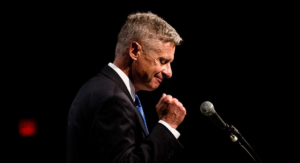 Americans are going to have three — count ’em, three — legitimate candidates for president and vice president of the United States to consider.

You may now count me as among the millions of Americans who are going to ponder the third path to the White House.

The Libertarian Party has nominated two accomplished former governors as its ticket to ride: Republicans Gary Johnson of New Mexico for president and William Weld of Massachusetts for vice president.

I’ve told you already that I’ve voted exclusively for Democrats for president/VP since I started voting back in 1972. I’ve split my down-ballot ticket, though, over the years; I’ve voted for many Republicans for U.S. Senate and House, and for state and local offices in the two states where I’ve lived.

I do not yet know how I’m going to vote this year for president and vice president.

Under no circumstances would I vote for the likely GOP nominee Donald J. Trump and whoever he picks as his running mate. That’s a given.

Both of these gentlemen were moderate Republicans when they governed their respective states. Today’s version of hard-core Republicanism would call them RINOs, Republicans In Name Only. Johnson is most well-known for advocating the legalization of marijuana. He also did a creditable job running New Mexico. I know a whole lot less about Weld.

Both are men of substantial financial means … although I don’t hear either of them brag about it the way Trump boasts of his y-u-u-u-g-e fortune.

Given that I understand that voting preference is a private matter, I’m not likely to reveal who will get my vote. That might become evident as I continue to comment on matters as the campaign progresses.

OK, you already know who won’t get it.

I suppose, then, that my choices now are just two — which is what they’ve always been in the past.

I now declare myself ready and willing to examine a ticket other than one from either of the two major political parties.

That’s a big step. At least it is for me. 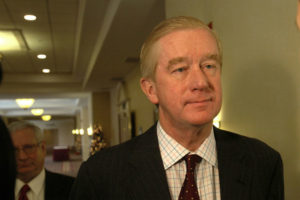 “I can hear the glass crunching on Kristallnacht in the ghettos of Warsaw and Vienna when I hear that, honest.”

So said former Massachusetts Gov. William Weld. What drew that hideous description? Donald J. Trump’s proposal to round up 11 million illegal immigrants and deport them to their country of origin.

Weld, though, just isn’t any former politician. He is about to become a vice-presidential candidate seeking election on a Libertarian Party ticket led by former New Mexico Gov. Gary Johnson.

Weld’s reference is to Adolf Hitler’s persecution of Jews in Europe.

I’ve already lamented the careless references to Hitler and to the atrocities he committed prior to and during World War II.

This is another such reference.

I’ve already noted in this blog that I am giving the first hint of consideration to a third-party ticket when I get ready to vote for president this fall.

What’s more, I happen to think highly of Gov. Weld, the former Republican governor of the Bay State — and of Gov. Johnson, another Republican.

I do not wish to hear more of these Hitler references, though, when discussing Trump’s moronic idea of rounding up every illegal immigrant and booting them out of the country.

The idiocy of this idea can produce plenty of arguments against without referencing Hitler. 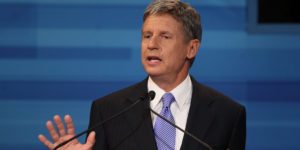 I am a dedicated two-party presidential election traditionalist.

My tendency is to dismiss third-party candidacies. My thought always has been that they have no chance of winning, therefore I won’t waste my vote, which I value greatly.

I am now about to announce that I am considering following the lead of one of my sons, who declared just the other day that he’s likely to vote for someone other than Donald J. Trump and Hillary Clinton.

There, I’ve announced it.

Two former moderate Republican governors have teamed up as Libertarians seeking to run for president and vice president.

The Libertarian Party must nominate them. My strong hunch is that they will.

This won’t be Gov. Johnson’s first rodeo. He ran four years ago and collected about a million votes. I’ll bet you some serious money he and Gov. Weld will do a lot better than that this year.

And, no … he didn’t cost President Bush his bid for re-election. I’ve seen ample polling data that suggest that even without Perot on the ballot that Clinton would have won by roughly the same margin he rolled up in 1992.

Why am I thinking about a third party? I’m not entirely thrilled with Hillary Clinton as the Democratic nominee. Trump never — in a zillion years — would get my vote.

Don’t misinterpret me here. I haven’t yet committed to a third party candidate. I’m merely thinking about it, which by itself represents a major shift from my normal political thought process.

Johnson’s major claim to political fame was his call for legalization of marijuana. I was working for a newspaper — the Amarillo Globe-News — at the time he issued that call and the paper’s corporate ownership never would support legalization of marijuana; therefore, I wrote editorials criticizing Gov. Johnson’s “wacky” notion. I’m now writing my own blog, under my own name, and my view on that issue is, well, evolving.

Weld is another moderate former GOP governor. No single stands out, but I’ve long perceived him to be far from what’s becoming the Republican “mainstream” that wants to round up illegal immigrants, wants to criminalize abortion and wants to send American troops into battle at the slightest sound of gunfire.

Yes, this is just another example of how wacky this election campaign has become.