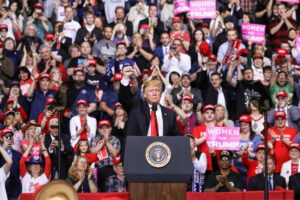 I am not going draw any ideological parallels between Donald Trump’s political rallies to Ku Klux Klan rallies, however, it strikes me that I ought to explain why I am drawn to the notion of attending one of those Trump events.

We have one coming up next Thursday at the American Airlines Center. The president will be there to whip his followers up and get ’em energized as he ramps up his re-election effort in the face of probable impeachment by the House of Representatives.

I want to attend this rally because I am drawn by the pull of seeing of these spectacles up close, from a ringside seat.

I had similar pulls years ago. I attended two Ku Klux Klan rallies. The first one occurred in the early 1990s in Orange County, Texas. The second rally was in 2006 in Amarillo, Texas.

Why did I go? I was working for daily newspapers at the time. No one assigned me to either of these events. I just felt compelled to go because I needed to get a sense of what drove Klansmen to say the things they do about African-Americans and what drove their supporters to cheer the verbal sewage that spilled out of the Klansmen’s mouths.

I got an earful at both events. In their way, both KKK rallies helped round out my professional experience in a fashion that I cannot to this day describe.

Perhaps the Trump rally in Dallas next week will fill out another blank in my journalism upbringing, even though I no longer work full time for any publication. I write this blog for myself. It is full of my own bias, which I do not hide from anyone.

Still, I find the idea of attending a presidential re-election rally to be an irresistible urge, even if it has anything to do with a president named Donald John Trump.