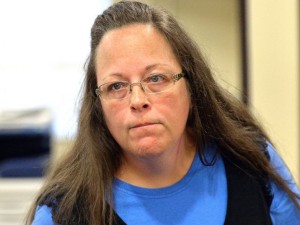 Kentucky Gov. Matt Bevin took office and immediately issued a series of executive orders. Let’s look at one of them.

It no longer requires county clerks to put their names on marriage licenses. Can we hear an “amen!” from Kim Davis, the Rowan County clerk who refused to do her job as required by law, and her oath, on the grounds that issuing such licenses to gay couples violated her religious beliefs?

Bevin’s order intends to protect the religious rights of county clerks who object to issuing the licenses on religious grounds.

I believe the main issue here is whether county clerks — who take an oath to protect and defend their state and federal constitutions — are obligated to marry anyone who seeks a license. The 14th Amendment to the U.S. Constitution guarantees that all citizens are guaranteed equal rights and protection under the law and it makes no stipulations about their sexual orientation.

If Gov. Bevin’s order now guarantees that all Kentucky residents can now seek and receive legal marriage licenses, without regard to whom they are marrying, then he’s done the right thing.