Have you ever seen a film that leaves you with a guilty conscience?

I just saw such a film. Today. I sat between my wife and son for a couple of hours watching “Wonder.” The parents in the film are portrayed by a couple of well-known actors: Julia Roberts and Owen Wilson. 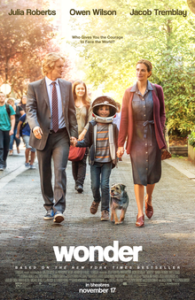 But then there’s this boy, the “wonder” in the eyes of his mother. Jacob Tremblay portrays a youngster named August Pullman, who was born with a serious facial deformity.

Auggie is home schooled by his mother. Then his parents decide to send him to a prep school in New York City. He gets the expected harsh reaction from fellow fifth-graders when he enters the school. Auggie powers through the ridicule, the taunts, the hideous give-and-take that middle schoolers are so capable of delivering.

I won’t give any more of the plot away. It is, simply put, just about the sweetest film I have seen since, oh, I can’t remember when.

The film is based on a novel, which by definition is a fictional story. Auggie’s story, though, does mirror the real-life story of a young man named Nathaniel Newman, who was born with Treacher Collins syndrome. Nathaniel’s story was detailed on a recent edition of “20/20” on ABC-TV.

In the film and in real life, the boys who are affected by this syndrome are just as normal as any children with whom they interact. Auggie happens to be a science genius who loves the space program and wants to walk someday on the surface of the moon.

My guilt comes from the gripes I level at seemingly trivial matters. I get stopped by traffic? I complain about it. Someone cuts in front of me at the grocery store? I grumble under my breath. My favorite football team loses a close game? I curse the television set.

Then I witness on film the portrayal of a little boy who has to go through life with a struggle that too few of us can understand and appreciate. I read about another little boy with precisely the same condition and wonder: Could I be so noble and gracious in light of such struggle as he faces each day in the real world?

It makes me ask myself: Why in this world should I ever complain about anything ever again?