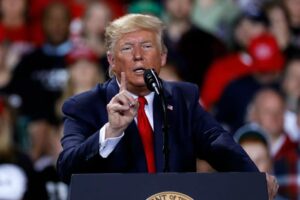 Given all the times Donald Trump has managed to wriggle free of potentially disastrous verbal blowups it has become absolutely impossible to gauge the damage that might be done by the president’s latest rhetorical misadventure.

On the day the House of Representatives impeached him for abuse of power and obstruction of Congress, Trump stood before campaign rally crowd in Battle Creek, Mich., and implied that the late legendary congressman John Dingell might be “looking up” from hell.

The outrage was immediate. It was fierce. It came from both sides of the aisle.

Will this form of rhetorical nonsense spell the end for Trump? It should. Then again, so should any number of previous verbal disasters.

He denigrated the heroism exhibited by the late John McCain during the Vietnam War; he criticized a Gold Star couple for their speech at the Democratic National Convention; he was heard telling a TV interviewer how he grabs women by their “pu***” because … he can; he mocked a New York Times reporter’s physical ailment.

Through it all, Trump survived. His candidacy kept on track. He told the world that he could “shoot someone on Fifth Avenue” and not lose any support. We laughed and groaned at the same time. It turns out he might have been (more or less) correct!

How in the world does this guy get away with this kind of thing?

Count me as one of those Americans who just cannot figure it out. The things he says would doom any other candidate or public officeholder.

And I haven’t even mentioned the incessant lying. Oh, wait. I just did.

The John Dingell matter speaks directly to the cruelty that frequently reveals itself from this individual. And that makes me wonder: Is there a limit to the cruel language that this man’s core supporters will endure? 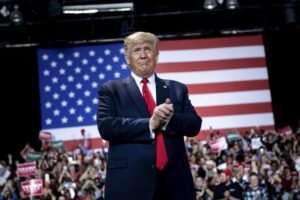 White House press secretary Stephanie Grisham has inherited the toughest job on Earth: trying to defend the indefensible snarkiness from the current president of the United States.

Grisham gave it a shot this morning, saying that Donald Trump is a “counter puncher” in her effort to defend Trump’s hideous insult last night that implied that the late U.S. Rep. John Dingell is in hell.

Maybe you heard Trump say it. He was talking about Dingell’s wife, Debbie, who voted in the House to impeach Trump. Trump rambled on about Dingell “looking down” on his wife, then added, “maybe he was looking up. I don’t know.”

You could hear the audible groan from the rally crowd gathered in Battle Creek, Mich., in the home state where John Dingell served in Congress longer than anyone in U.S. history.

Trump didn’t back off.

Neither did Grisham this morning on “Good Morning America.” But really? Declaring that Trump is a “counter puncher” as a defense against the latest utterly tasteless, crass and reprehensible remark to flow out of POTUS’s pie hole?

Donald J. “Comedian in Chief” Trump is now an impeached president of the United States.

While the House of Representatives was voting to impeach him, the president stood in front of a campaign rally in Battle Creek, Mich., and riffed on all the folks who did him wrong, in his eyes.

Then the president stooped way down low. He brought up the memory of the late U.S. Rep. John Dingell, a Michigan Democrat who served in World War II and then held a House seat longer than anyone in U.S. history. He died this year. His wife, Debbie, is now serving in Congress and, yes, she voted to impeach Trump.

What did the president say about the late, great, Rep. Dingell? He talked about the military funeral he received; Dingell is buried in Arlington National Cemetery.

“Maybe he’s looking up.” Did you get that one? Yep, the president of the United States implied that the late Rep. Dingell might be in hell.

Debbie Dingell responded with this tweet: “Mr. President, let’s set politics aside. My husband earned all his accolades after a lifetime of service. I’m preparing for the first holiday season without the man I love. You brought me down in a way you can never imagine and your hurtful words just made my healing much harder.”

I will not offer a comment on that idiocy, other than to call it utterly heartless.

Doesn’t he just make you so damn proud? Me, neither. 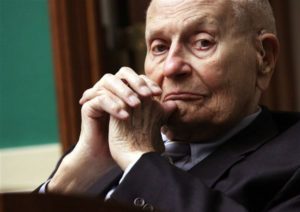 I predict that after a certain amount of time has passed that some congressional critics are going to suggest that the late John Dingell was the embodiment of the need to impose limits on the terms of members of Congress.

I would argue that John Dingell embodied instead the best argument against such a restriction.

Dingell, a Democrat, served his Michigan congressional district for 59 years, the longest continual service in the history of the House of Representatives. He succeeded his father, who died in office. When he left office, Dingell turned it over to his wife, Debbie, who’s in the office at this moment.

Dingell served alongside every president from Dwight Eisenhower to Barack Obama.

What is most remarkable about Dingell is that he accomplished so much while serving in the House. He was far from just a placeholder, a backbench bomb-thrower.

He was a former board member of the National Rifle Association, he helped champion environmental legislation, he was a friend of labor, he sought to elevate government oversight in Congress, he supported civil rights legislation and turned against the Vietnam War in 1971.

What we need to understand about Dingell’s nearly six decades in the House is that the voters who kept re-electing him were satisfied with the representation he gave them. Had he run off the rails at any time during his lengthy time in the House voters would have taken matters into their own hands. They would have booted him out. They chose instead to keep John Dingell on the job.

Therefore, I stand by the assertion that Rep. Dingell is a testament against a foolish and unnecessary restriction on members of Congress.

John Dingell is a congressional dinosaur and even might admit it himself.

The longest-serving member of Congress is leaving office at the end of this year and he doesn’t sound like someone who’s going to miss the place it has become.

Instead, he seems to be missing the place it used to be.

Dingell, a Michigan Democrat, is now 87 and has seen lots of change over many decades of service. He has led powerful House of Representatives committees and has put his name on key legislation. He worked to enact laws with the help of Republicans — and it’s that bipartisanship that appears to have taken leave of Capitol Hill.

Dingell expressed understandable frustration with the new climate in an interview with USA Today.

“We’ve accomplished very little,” Dingell said of recent Congresses. “We’ve been engaged in all manner of small, spiteful fights. We have failed to carry out our responsibilities in addressing the big issues the day.”

The culprit? It’s the tea party wing of the “other” party, the Republicans who share power with Democrats on Capitol Hill, according to Dingell.

“A lot of these new ones,” he said of his junior colleagues, “have no awareness … of the need to work together, no awareness of the need for members to be friends off the congressional campus, no need they see in their lives to be responsible in terms of building trust and relationships to let us work together.”

Dingell is far from being alone in wishing for the good old days. But, indeed, it’s the “good old days” that have become the target of the tea party members’ own anger and frustration.

Have they made Congress a better place to serve the people who sent them there? John Dingell doesn’t believe so.

The old curmudgeon is glad to be leaving and will leave the partisan bickering to others.

When John Dingell says that life in Congress has become too much to handle, then you know things have gone badly.

Rep. Dingell, D-Mich., is the longest-serving member in the history of the U.S. House of Representatives. Today he announced he is retiring at the end of his umpteenth term.

For 58 years Dingell has been serving the people of his House district.

I’m trying to think if there has been a more cantankerous member of the House then Dingell. One name comes to mind: the late Jack Brooks, D-Beaumont, who served for 40 years before losing his seat in the landmark 1994 Contract with America GOP sweep of both houses of Congress. “Sweet Ol’ Brooks,” which he called himself, was my congressman and we had, shall we say, a checkered relationship during the years I covered him while working for the paper on the Gulf Coast.

Dingell is at once a poster for and against term limits. He made congressional service his career, which term limits proponents say runs counter to the Founders’ wishes. Then again, the folks in his Michigan congressional district thought enough of him to keep re-electing over the course of 50-plus years.

“I find serving in the House to be obnoxious,” Dingell said. “It’s become very hard because of the acrimony and bitterness, both in Congress and in the streets.”

So, another longtime veteran is calling it a career. When this man says public service in Washington has become “obnoxious,” then you’d better break out the gas masks.