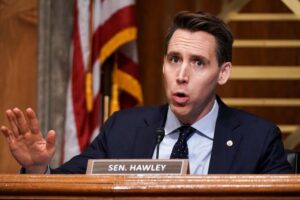 Josh Hawley has just tossed his hat into a mythical ring signifying a campaign for Dipsh** of the Year in the U.S. Senate.

Hawley is a freshman Missouri Republican who has announced his intention to challenge President-elect Biden’s victory in the just completed election. Hawley’s intention is to force a debate on whether there is widespread voter fraud, the kind of bogus allegation that Donald Trump has been making, that resulted in Biden’s election as the next president of the United States.

Hawley plans to object to the Electoral College certification of Biden’s clear and decisive — and honest — victory.

The idiotic display won’t change the outcome. It merely delays the Senate ratification of the electoral vote tally until after senators and House members have a debate.

What in the hell they plan to debate is beyond me.

Hawley’s grandstanding move comes in direct defiance of what Senate Majority Leader Mitch McConnell has implored of his fellow GOP caucus members. However, it plays straight into the wheelhouse of Donald Trump — the Dipsh** in Chief — who is seeking to obstruct the president-elect’s smooth transition into the presidency.

Way to go … senator! You, young man, are an idiot!