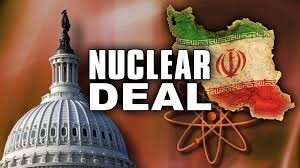 There once was a time — it seems like an eon or two ago — when foreign policy decisions weren’t divided along party lines.

Those days are gone. Maybe they’ll be back. Eternal optimist that I am, I remain hopeful for a return of sanity in our federal government.

The Iran nuclear deal is the most glaring example I’ve seen of how partisanship now supersedes national unity in the face of threats from adversaries.

U.S. Sen. Jeff Merkley of Oregon, became the 31st Democrat to endorse the deal brokered by Secretary of State John Kerry and officials from five other great powers. Its aim is to prevent Iran from developing a nuclear weapon. Iran has insisted it intends only to provide energy for its people; of course, no one believes that.

Congressional Republicans appear united in their opposition to the deal. Democrats are mostly united in favor of it, although some have declared their intention to vote “no” when the issue comes up for a vote.

Merkley said something quite wise in announcing his support of the deal: “The future, whether we approve or reject the deal, is unknowable and carries risks. But the agreement offers us better prospects for preventing Iran from acquiring nuclear weapons and more tools and leverage to ensure that outcome.”

We cannot predict the future with absolute certainty, he said.

Is the deal perfect? No, but then again, when have we ever struck the perfect foreign policy agreement with anyone?

The agreement aims to derail whatever intentions the Iranians have of developing a nuclear bomb. It allows inspections of sites. It dismantles centrifuges. It allows the rest of the world to bring back strict economic sanctions if the Iranians are caught cheating on the deal.

None of that is enough to persuade Republicans to back it.

So, the world’s greatest military power is now showing to the world that its foreign policy team is being undercut by partisan political divides when it should be demonstrating an unflinching resolve to stand united against a rogue nation.

It’s turning instead into a numbers game, with Democrats seeking to pile up enough votes to filibuster Republican opposition to the deal while also gaining enough votes to sustain a certain presidential veto of any GOP rejection of the deal.

Mary Landrieu’s loss of her U.S. Senate seat in Louisiana might be the least surprising part of the 2014 mid-term election.

She was the last statewide Democratic officeholder in Dixie.

What does surprise me — and unpleasantly so, I should add — is that according to one veteran political observer, the ’14 mid-terms have ushered in the end of ticket-splitting.

More and more Americans are voting for the party rather than the candidate.

Stuart Rothenberg, writing for Roll Call, says voters are just hitting the straight-ticket spot on their ballot and that voting for individual candidates’ is becoming a rare occurrence.

Rothenberg attributes this to the growing ideological divide between Democrats and Republicans. The parties have become branded as standing for certain things and voters aren’t wasting their time studying candidates’ stands on key issues of the day.

Democrats are being identified as the party of liberals such as Sens. Jeff Merkley of Oregon, Al Franken of Minnesota and Elizabeth Warren of Massachusetts. The Republican brand includes the likes of Sens. Rand Paul of Kentucky and Ted Cruz of Texas, two favorites of the TEA party movement within the GOP.

The casualty, therefore, becomes the practice of examining what the candidates say about issues, relying instead on the party’s message.

I would prefer we did away with the straight-ticket voting option. If someone wants to vote straight Republican or straight Democratic, then make them go through the ballot race by race, candidate by candidate and make them think — if only for an instant — about the candidate they’re about to endorse.

Why can’t we require voters to at least go through the motions of thinking about their vote?

Well now. It appears that Democratic liberals in Congress are rising up to give their leaders as much grief as the tea party Republicans are set to do to their leaders.

Excellent! That’s the Democratic Party with which I came of age back in the 1960s.

The defeat of the Keystone XL pipeline in the Senate seems to have juiced up the lefty caucus on Capitol Hill. They’re set to do battle with the more, um, “establishment” members of the Democratic minority in both congressional houses.

It’s looking like we might have two intraparty squabbles erupting in Congress when the next body convenes in January.

The president is stuck having to deal now with two warring factions within each party. He’s bound to anger the extremists on the left, too.

“I will use whatever tools I have as a senator to protect the environment,” said Sen. (Jeff) Merkley, a liberal from Oregon. Asked if he could ever envision himself performing a Rand Paul-style talking filibuster in the Republican Senate, (Sheldon)

Whitehouse of Rhode Island replied: “Oh, of course. We will have more tools in the minority than we had in the majority.”

The liberals don’t like President Obama any more than the conservatives do, or so one might be led to think.

Which begs the question: If Obama is ticking off conservatives so much, how is it he can do the same thing to liberals?

A truism in journalism is that if you’re angering both sides of an argument, then you’re doing a good job.

Not so in politics.