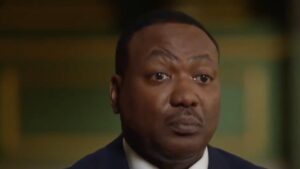 Now we know the name of the Capitol Police officer who shot Ashli Babbitt during the 1/6 insurrection.

His name is Michael Byrd, a lieutenant with the Capitol Police force.

Lt. Byrd is a hero. He stopped a woman who was trying to break through a door during the hottest moments of the riot. He fired a single shot at her. Babbitt died that day.

Now we also hear from Byrd himself that he has been the target of death threats, racist attacks (he is African-American), and has been called a “murderer” by the 45th president of the United States, in whose name the terrorists attacked the Capitol Building on 1/6.

Byrd spoke to NBC News anchor Lester Holt. He felt he wanted to reveal his identity to put to rest some semblance of the mystery surrounding the shooting of Babbitt.

I feel the need to mention three things about Babbitt. She was an Air Force veteran. She also was an ardent supporter of the 45th POTUS and a believer in the QAnon conspiracy insanity that drives so many of those who adhere to the cult of personality associated with the former Insurrectionist in Chief.

Babbitt was not “murdered” by Lt. Byrd. He was doing his job, which was to protect members of Congress against the angry mob that sought to prevent Congress from certifying the results of the 2020 presidential election.

The most shameful consequence of all of this, of course, is the Republican lawmakers’ refusal to grant Congressional Gold Medals to the law enforcement heroes who stood in harm’s way to protect them.

One hero is Michael Byrd.