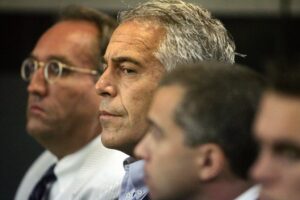 Jeffrey Epstein’s corpse likely isn’t even all that cold just yet and already social media are crackling with conspiracy notions of how he died, why he died, who made it happen … along with all manner of nefarious motives.

Epstein was the accused human trafficker who peddled underage girls reportedly as sex slaves. He was pals with people in high places, most notably Donald J. Trump and William J. Clinton, the current and former president of the United States of America.

What is admittedly bizarre about Epstein’s death is the manner he supposedly was taken off suicide watch. He reportedly tried to hang himself in the Manhattan jail where he was being held. Corrections officers found him unconscious; he had marks on his neck suggesting he tried to string himself up. The jail put slapped a suicide watch on him. Then they supposedly lifted it.

That begs the question: Why do you remove the suicide watch on an inmate you believe tried to kill himself in your custody?

My maximum distaste for conspiracy theories has nothing to do with what we need to know in this moment. Yes, I want answers. I want to know how this a**hole was able to hang himself in the presence of corrections official who were tasked with keeping this high-profile suspect alive long enough for his case to be determined.

I want those answers delivered in a timely fashion. It would seem to be within easy grasp of those in charge of the Manhattan jail that was housing Epstein.

I will agree wholeheartedly that there are a lot of questions to be answered. The presence of a president and a former president in this guy’s sphere of friends and acquaintances makes this case extraordinary on its face. There likely were a lot of high-powered individuals with a lot to lose were this guy to go to trial.

Let’s find out what happened to this dude. 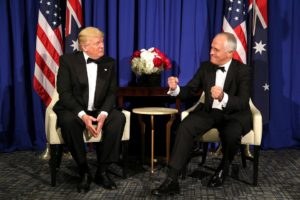 He or she has revealed to the world the utter ignorance of the man who now holds the title Leader of the Free World. That would be, of course, the president of the United States of America.

A Vanity Fair article almost damn near explains itself. It concerns a chat Trump had with the prime minister of Australia; the other leaked transcript is of a phone conversation between Trump and the president of Mexico. I might have something to say about that one later.

Read the article here. If you’re in the correct frame of mind, you’ll be highly amused. Or … you might be as horrified as I am.

The article chronicles a discussion Trump had with Prime Minister Malcolm Turnbull shortly after the president took office. The chat began with Turnbull explaining Australia’s policy banning immigration by anyone by boat to the island nation. The policy aims to stop human trafficking, a risky endeavor no matter what, but particularly so regarding a nation surrounded by water. As Vanity Fair writer Bess Levin notes: “The details of said deal were fairly straightforward: in order to deter human smuggling, as well as to prevent people from drowning at sea, Australia has a policy of not allowing refugees who arrive by boat to enter the country. That means you could be the second coming of Mother Teresa, Mr. Rogers, and Albert Einstein all rolled into one, but if you arrive by boat, you’re not coming into the country.”

The conversation devolved into an argument stemming from the president’s inability to grasp precisely what Turnbull was trying to explain to him, which is that Australia couldn’t keep sending boat people to an island and asked if the United States could take some of them. Trump wouldn’t budge. Turnbull insisted that America had the right to deny anyone it wanted, that it didn’t have to accept every one of them.

The deal in question was struck by then-President Barack Obama. It involved 1,250 refugees. Trump kept misconstruing the number. Turnbull said the number was fixed at 1,250; Trump either didn’t hear it or ignored it willfully.

The conversation went on and on. Turnbull tried his best to explain to Trump as plainly and simply as possible what was at stake. Trump was having none of it.

The conversation is graphic insofar as it demonstrates Trump’s absolute ignorance of foreign policy. But the president “tells it like it is,” dammit!

To the individual who leaked these transcripts to the world, I say “Thank you for your profound public service.” 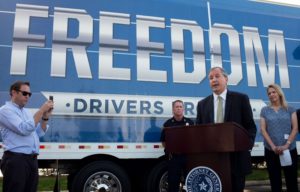 Heaven knows I’ve been critical of the current attorney general, Ken Paxton, over his allegedly lax ethical standard. Today, though, I want to salute the work he is continuing with truckers in combatting human traffickers.

Paxton is employing trucking organizations to put extra sets of eyes on those who might be suspected of transporting sex slaves across the state.

Paxton calls human trafficking “modern-day slavery.” It’s a hideous crime against humanity. The Texas attorney general is to be commended for using his office along with civilians who are on the road constantly to be on the lookout for those who prey on defenseless human beings.

As the Texas Tribune reports: “(Paxton) said the partnership helps educate truck drivers on the signs of human trafficking and how to report it. Paxton added that such a focused effort will help ensure that victims will be identified and rescued, and that traffickers will be punished.”

Truckers Against Trafficking is one of the groups that is working with the state in searching for human traffickers. Founded in 2011, this organization helps educate truck drivers in identifying human traffickers and ensuring they report what they see to the proper authorities.

Bexar County District Attorney Nico LaHood calls this initiative a form of “community policing.” As the Tribune reports: “This is a wonderful way to show how community policing works – bringing in partners from the community, people who are in the trenches, on the front lines to be our eyes and ears for law enforcement and prosecutorial agencies.”

We live in a huge state with many thousands of miles of highways. The state doesn’t have an unlimited set of eyes to search for these criminals. Enlisting the truckers doesn’t provide a limitless surveillance capability. However, it gives the state a crucial ally in this important crusade.

Mitch McConnell promised to make the U.S. Senate work better if he became its majority leader.

The upper legislative chamber would start governing again, he said.

OK, so how’s he doing on his pledge? Not very well.

The Kentucky Republican has announced he plans to hold up a confirmation vote on Loretta Lynch to become the next attorney general if Democrats don’t play ball on a controversial human trafficking bill.

What does one thing have to do with the other? Not nearly enough to justify holding up Lynch’s confirmation vote.

Democrats are holding back their support of a trafficking bill that was supposed to be a non-controversial piece of legislation. Then they read some of the fine print in it and are now balking. McConnell said the Senate needs to clear that bill off the table before it considers Lynch’s nomination to succeed Eric Holder as the nation’s AG.

This nomination needs to move forward. Lynch is highly qualified to be the nation’s attorney general. Republicans keep saying how much they dislike the way Holder does his job. Meanwhile, the Senate majority leader is doing all he can to ensure Holder stays on the job.

As The Hill notes, Lynch has been twisting in the wind long enough: “Lynch’s nomination has been awaiting confirmation for 128 days, longer than the past five attorneys general. Holder, by comparison, had to wait only 64 days before receiving Senate confirmation.”

Schedule a vote, Mr. Majority Leader, and allow Loretta Lynch to be confirmed.

Linda Chavez asks in a New York Post column why the Obama administration doesn’t “do more” to stem the flow of children from Central America into southern border states such as Texas, New Mexico and Arizona.

I kind of expect that from Chavez, a noted conservative thinker and pundit.

I’ve been wracking my brain the past few days with this question: Why doesn’t Mexico do more to stop the flow of these unaccompanied children all the way through that country and into the United States of America?

Chavez and others have noted that the kids have to travel about 1,300 miles through Mexico to reach the southern border of the United States. How is it that those children are given free passage through a fairly large country to end up in the Land of Opportunity?

If President Obama has a bone to pick, it ought to be with the Mexican government.

Chavez lays out a grim scenario: “According to recent reports, these kids walk right up to border agents as soon as they see them and turn themselves in. They’ve been instructed to do so, sometimes by the criminal ‘coyotes’ who extort hundreds, even thousands, of dollars from the kids’ parents to get them across the border.

“These human traffickers are telling parents their children will be granted a legal right to stay in the U.S. once on our soil. This is absolutely false — but that word is slow in getting to gullible would-be border crossers.”

However, geopolitical neighborliness compels one country to do all it can do to protect its orders with another nation.

Critics keep harping on the openness of the U.S. side of our border with Mexico. They forget — or ignore — the fact that we’ve deported record numbers of illegal immigrants in recent years. The problem just has been compounded many times by the flood of these children from beyond Mexico’s southern border.

Whose fault is that? Ours? I don’t think so.