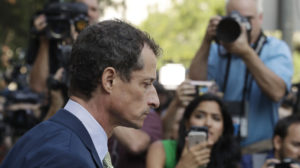 So help me, I don’t know why I’m even remotely interested in Anthony Weiner.

This clown has destroyed his marriage to a brilliant political operative. He has shredded his own political career. He has made a mockery of himself and disgraced the New York congressional district voters who placed their trust in him to obey the law. Of the consequences mentioned here, I suppose the only one that gives me a mild case of regret is constituent trust he destroyed because of his shameful conduct.

Weiner is going to appeal his sentence. He ought to be thankful that’s all he got from the federal judge, Denise Cote. He could have faced a longer prison term. He’s also going to serve a three-year probationary period.

Weiner made a bit of a national name for himself initially because he was such a gasbag while serving in the U.S. House of Representatives. There was a particularly bizarre moment on the House floor when congress members were debating the cost of health care for first responders. Weiner exploded in anger that some Republicans opposed spending the amount of money that Weiner wanted spent.

This guy’s “sexting” escapades eventually became part of the story involving his wife and her work with the Clinton campaign during the 2016 presidential campaign.

Whatever. He’s gone to trail. He’s been convicted. The judge has sentenced him to nearly two years in a federal lockup. 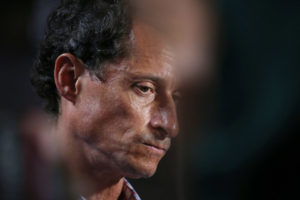 Texas elections officials are beside themselves.

Early voting is setting records throughout the state, they say. In the part of the state where I live — the Panhandle — Potter County elections officials also report record turnout for the early vote.

Now, the question: Does the big early vote translate to a larger overall vote? My concern is that record-setting early vote means only that more Texans are voting early … period!

We hear similar reports around the country, where state and local elections officials are crowing about all this early-vote interest.

What in the world is driving it?

Well, I suppose it might have something to do with the news of late this past week, with FBI Director James Comey’s announcement that he might have some more information to reveal about Democratic presidential nominee Hillary Rodham Clinton’s e-mail controversy. Legal experts across the spectrum do not anticipate any penalty will come Clinton’s way. The focus now appears to be on Clinton aide Huma Abedin and her estranged dirtbag husband — Anthony “Carlos Danger” Weiner and his hideous sexting scandal.

Democrats want voters to cast ballots early — perhaps before they change their mind. Republicans are seizing on it, too, before more stuff comes out about their nominee, Donald J. Trump.

As for the Texas turnout, the Lone Star State generally ranks among the poorest turnout states in the country.

I thought early on that because of the two major-party candidates’ low esteem among voters that this year’s presidential election turnout might set an all-time low.

I would be delighted to be wrong about that prediction, too. 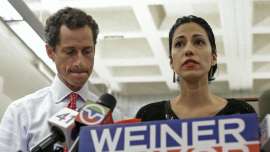 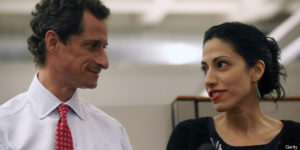 A high-profile political marriage now appears to have ended, thanks — allegedly — to some continued scurrilous behavior by a former Democratic New York congressman.

Abedin today announced she is leaving her husband. The marriage seems to have ended.

We’ve been down this road to nowhere before. Danger admitted to “sexting” in an earlier round of messages. Abedin decided to hold on to her marriage.

She fought hard to stay married to this nimrod, who used the moniker “Carlos Danger” while he was sending pictures of his manhood to women.

So, what’s been the reaction of Republican presidential nominee Donald J. Trump? He said the end of this marriage proves that Clinton lacks proper judgment to become president.

Huh? Yeah. That’s it. The end of a marriage become grist for political trash-talk.

I am not yet clear as to what Abedin’s marriage to an apparent dirt bag has to do with her work with the former secretary of state and current candidate for president.

Danger, er, Weiner needs to vanish. Abedin needs to collect herself and resume her work.

Abedin is a highly accomplished individual who I believe deserves a bit of space as she seeks to rebuild her personal life.

I do not believe, though, that Donald Trump is going to give it to her. 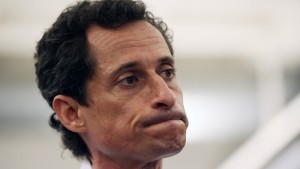 You must hand it to Donald Trump.

He hits every hot button there is to hit. And he doesn’t miss very often.

His latest target if Huma Abedin, aka Mrs. Anthony Weiner.

Abedin is a close adviser and confidante to Hillary Rodham Clinton, who’s being rocked by these e-mail revelations relating to the time she served as secretary of state.

But it wasn’t so much Abedin who took the brunt of Trump’s latest trash-talking tirade, delivered Friday in Massachusetts. It was Abedin’s husband.

Former U.S. Rep. “Carlos Danger” Weiner, you’ll recall, was outed for sending pictures of his manhood through the Internet to women who aren’t his wife. He quit his congressional seat. He then ran for New York City mayor and lost badly.

He’s out of the public eye. Or at least he was out of it … until now, thanks to Donald Trump. “So now — think of it — Huma is getting classified secrets. She is married to Anthony Weiner, who is a perv,” Trump said. “Now these are confidential documents and guess what happens to Anthony Weiner. A month ago he went to work for a public relations firm. ”

Actually, Trump is overstating Weiner’s place in recent political history. He called the ex-lawmaker “one of the great sleazebags of our time.”

I don’t think so. He’s a chump who got his thrills sending dirty pictures to women.

Do not fret, though. Trump has energized a segment of the Republican Party that eats this stuff up.

I’m still having trouble wrapping my head around the words “President Trump.”