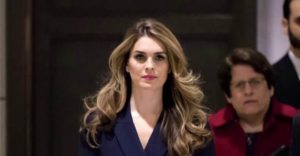 Michael Cohen once was Donald Trump’s lawyer, a man he could count on to “fix” things gone awry. He’s now one of the president’s worst nightmares.

Hope Hicks once served — albeit briefly — as communications director for the White House occupied by Donald Trump. Now she’s gone over the hill, telling congressional Democrats she wants to cooperate fully with them.

Cohen likely was motivated to turn against Trump by a prison sentence he received after pleading guilty to lying to Congress; he is set to start a three-year federal prison term soon. He might, it should be noted, get that sentenced reduced.

Hicks isn’t driven by that necessity. She has told House intelligence and judiciary committee members she lied on Trump’s behalf. She says she’s done lying.

Oh, my. It seems as if this saga has no end. There’s no bottom to this pit. It sinks lower and lower.

Whether the special counsel, Robert Mueller III, provides anything of substance in his investigation of The Russia Thing now seems almost a moot point. There might be other information coming forward from former friends, political allies and associates of the president of the United States. 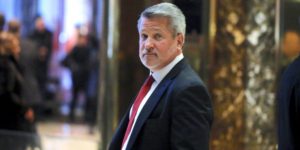 I have determined that the worst job in Washington, D.C., is one that should be the most fun. It is the White House communications director.

Bill Shine is leaving that post in the Donald J. Trump administration. Shine is the fifth individual to have served as communications director in the two years of Trump’s time as president.

Let’s see, I can think of Hope Hicks, Anthony “The Mooch” Scaramucci . . . OK, I’ve lost track of the rest of them prior to Shine.

I just know that there have been five of them. Who’s next? Who in the world would want the job?

It’s being reported that Shine — a former protégé of the late Roger Ailes, the founder of Fox News — had fallen out of favor with the president in the weeks prior to his sudden resignation; he is going to work as a senior adviser to the Trump re-election campaign.

I guess evidence of Shine’s lack of input into Trump’s communication strategy must rest in that hideous rambling rant the president gave a week ago at the Conservative Political Action Conference. Trump set a presidential speech record, blabbing unscripted for 2 hours, 2 minutes at CPAC. It was, to put it bluntly, a ghastly performance.

Do you think Shine had any say in that demonstration of Donald Trump at his worst? I do not think so.

The question then becomes: Who in the world would ever want to take on the job of managing this president’s communications strategy? This individual, the president, is unmanageable. He is incoherent and he is incorrigible.

Yep, this is what Donald Trump calls his “fine-tuned machine.”

Hope Hicks spilled the beans during testimony before a Senate committee this week.

The lame-duck White House communications director admitted to lawmakers that she occasionally has told “little white lies” on behalf of the president of the United States, Donald John Trump.

Hicks, the former model and actress, then resigned her office. She’ll leave in a few weeks.

However, that means she’ll remain on the job until she’s gone.

This all begs the question: Can we believe a single word that comes out of this person’s mouth? For that matter, I rarely take anything that flies out of Trump’s pie hole at face value.

Hicks is the fourth communications director to work in the Trump administration. Four of them have come and gone in just a little more than a single year.

“Fine-tuned machine” is it? Hardly. Hicks, who came into this job with no political or government experience, wasn’t cutting it.

Plus, she told “little white lies.” Or were they actually great big lies, sort of like the type that Donald Trump so very often tells us?

Can this man, the president, find anyone who is trustworthy? Or are they doing his bidding as the liar in chief? 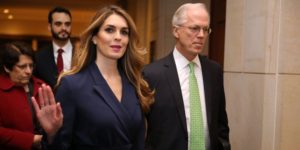 Big deal? Oh, yes. It is. Hicks is communications director No. 4 to leave the Trump administration, which has been in office for a year and a little more than a month.

But … Hicks is not your run-of-the-mill top White House aide. She is a former model; a former actress; she has zero political experience; she has no government experience.

Yes, this young woman was among the “best people” that Donald Trump promised to surround himself with once he became president.

Hicks has acknowledged telling “white lies” on the president’s behalf. They weren’t big lies, just little ones, she said.

Hicks’s departure once again highlights the goofiness of this administration’s hiring practices and the chaos that permeates the White House staff operation. The media are examining the information flow, the chain of command and whether Donald Trump has any kind of clue on how to run a government executive operation.

Hicks will be gone eventually. I can hardly wait to see who climbs aboard the Trump hay wagon next to try to cobble some sense into the White House communication apparatus.. Let us not forget that the president has told us he is at the helm of a “fine-tuned machine.”