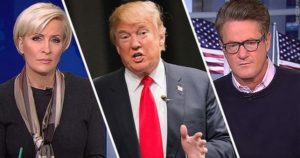 She contends in her stump speeches that the Republican Party’s presidential nominee lacks the temperament to be president.

Others have joined the chorus. Republicans echo Democrats in saying that Trump’s emotional outbursts bode ill for someone who seeks to become the next head of state, head of government and commander in chief of the world’s greatest military machine.

He’s launched into another Tweet-storm, this time hurling insults and invective at — are you ready? — two cable TV news talk show hosts! Joe Scarborough and Mika Brzezinski — co-hosts of the MSBNC “Morning Joe” talk show — now are in Trump’s sights.

He calls them “unstable.” He hurls insults at them. Oh, and he’s also suggested out loud that the two of them are — gasp! – dating each other. Which makes me say: B … F … D, dude.

Temperament? Sure, Trump’s got it.