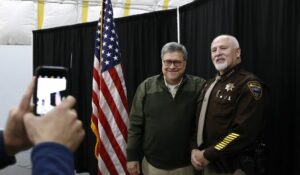 U.S. Attorney General William Barr sought to buck up the nation’s law enforcement network, but in doing so he seems to have suggested something dire and dangerous if the cops don’t get the respect they deserve from the communities they serve.

“They have to start showing more respect than they do,” Barr said of the public. “If communities don’t give [law enforcement] the support and respect they deserve, they may find themselves without the services they need.”

Is the attorney general actually suggesting — if not encouraging — that police might not respond to calls for help? Is he saying that police officers might give citizens the short shrift if they need protection?

In a ceremony honoring the top police officers from around the nation, Barr noted that military veterans suffered years of scorn in the years immediately after the Vietnam War; that has changed dramatically since the time of the Persian Gulf War. This veteran thanks my fellow Americans for the change of heart.

Are the nation’s police officers feeling the same level of disrespect? Hmm. I don’t know for certain, but it seems as if that the AG’s comparison is a bit overcooked.

If the attorney general is encouraging cops to go slow on emergency responses because the communities they serve don’t love them as much as they should, then he is committing a profound disservice to the nation … and its police forces. 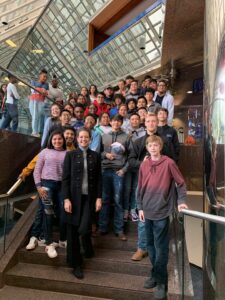 The woman in the dark suit at the front of this picture is Amarillo Mayor Ginger Nelson, who today posted a Facebook note that thanked Palo Duro High School students and their choir director for honoring our nation’s veterans.

They did so by singing patriotic songs at an Amarillo business on the eve of this year’s Veterans Day commemoration.

It’s the kind of salute this nation has been giving its veterans since, oh, about the time of the Gulf War in 1990-91.

Mayor Nelson thanked the choir director for stressing the importance of honoring our veterans, suggesting in her message that it’s a relatively new event.

Actually, the nation has performed a remarkable collective turnabout since an earlier time. I have mentioned this awakening in previous blog posts, so I won’t belabor the point here. The Vietnam War was a dark time on several levels. We were involved in a bitterly fought war in Southeast Asia; the tide never turned in our favor; emotions at home ran white-hot; much of Americans’ anger was turned on the veterans who did their duty.

The Gulf War changed that attitude. And it only has gotten more heartfelt in the nearly three decades since that conflict. We’ve gone to war in Iraq, Afghanistan, in Somalia; we have engaged enemy fighters throughout the world as they seek to harm Americans abroad or plot to bring more terror to our shores.

I join Mayor Nelson in thanking the students and their educators for recognizing what the nation should have recognized all along. 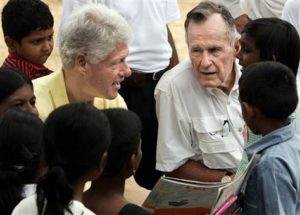 It won’t surprise those who read this blog carefully to realize that I didn’t vote either time — in 1988 or 1992 — for the late George H.W. Bush when he ran for president of the United States.

However, despite my own partisan leanings and admitted bias, I want to devote the next bit of time to honor this man’s life.

Long before he died last night at the age of 94, I grew to appreciate the profound public service that President Bush gave to the nation he served with such nobility, grace and grit. It’s not that I didn’t appreciate that service back when he was an active politician seeking election and re-election as president. Time, though, enables all of us to view people and instances through a different prism than we do in the moment.

Bush 41’s campaign for the presidency in 1988 was not his shining moment. He brutalized his opponent, Michael Dukakis, with a campaign that called Dukakis soft on crime and soft on love of country. Four years later, the economy was faltering and I felt we needed a change in direction.

OK, that all said, I believe it is important to honor the arc of this man’s life. Good heavens, President Bush led the fullest life one could possibly imagine.

He was born into privilege. He enlisted in the Navy right after Pearl Harbor, became the youngest aviator in the Navy during World War II; he was shot down and plucked from the ocean by a submarine crew. He came home, married Barbara Pierce, the love of his life. He finished college and went into business in West Texas. He was elected to the U.S. House of Representatives, lost two races for the Senate. Bush was appointed head of the CIA, special envoy to China, ambassador to the United Nations, he chaired the Republican National Committee, was elected vice president and finally as president.

He helped shepherd the end of communism in Europe. He watched the Berlin Wall come down in 1989. Then came the collapse of the Soviet Union in 1991. He led an international coalition against Iraqi dictator Saddam Hussein’s occupation of Kuwait.

Even after he left office, he remained active and on call when the need arose. He teamed with his old adversary, Bill Clinton, to lead an effort to raise money in the wake of the earthquake and tsunami that struck Indonesia in 2004, killing hundreds of thousands of people. The two men then became the best of friends.

This man’s life is worthy of honor by every American. President Bush devoted so much of his adult life to public service. That’s how I choose to remember this great — and good — man.

The other stuff that troubles us in the moment, the hideousness surrounding the current president? That can wait.